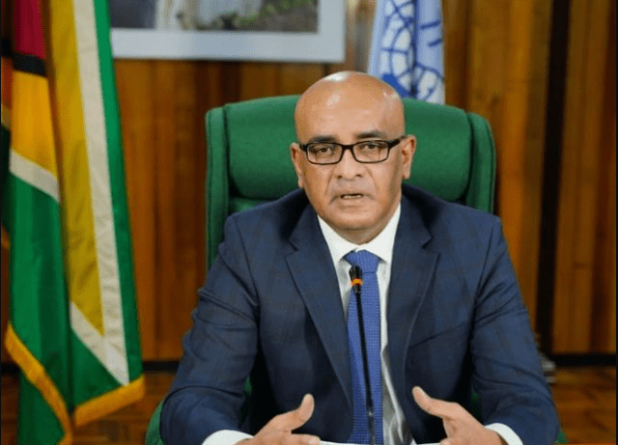 One such change was the establishment of the Parliamentary Standing Committees for natural resources, foreign affairs, economic services and social services. These Committees feature Members of Parliament (MPs) and a rotating Chair, from both sides of the aisle. Jagdeo lamented that these committees have not been functioning as they should.
“So, these are four standing committees. We agreed to rotate the chairs. We will chair two and the Opposition will chair two. In the United States and other places, if you’re in power and you have the majority, you chair all the committees.

“We decided that we will have the parties share the chairmanship and rotate it. That was one way how you have inclusion. And those standing committees have the power of reviewing Government policies in all of these areas. (But) we’ve never put those committees to full use.”
Jagdeo also cited the constitutional commissions and other changes made to reinforce inclusionary governance. He noted that notwithstanding the failure of their efforts to include the Opposition, they still have a duty to reach out.

“Then the constitutional commissions. We’ve established five rights commissions and the procurement commission; then the service commissions: the teachers, Police, judicial services commissions. We had a greater say from Parliament to name the commissions,” Jagdeo said.
“So, coming back to the point, I see the need for us as a country to settle on one agenda for the future. An agenda that progressively takes us upwards. And that parties can then subscribe, play the politics but still subscribe to the overarching economic agenda.”

Under the previous A Partnership for National Unity/Alliance For Change (APNU/AFC) Government, the constitutional reform process had hit a brick wall and was stuck before a parliamentary committee.
Soon after President Dr Irfaan Ali was sworn in on August 2, there were calls for Guyana to undergo much-needed electoral and constitutional reform. Days after the swearing-in, the US-based Carter Center, which was one of the international observer missions here to monitor the elections, said the 2020 election was a true test of Guyana’s democracy and urged the new Government to move quickly to undertake these reforms.

Constitutional reform is one of the main issues outlined in the People’s Progressive Party (PPP/C) 2020 elections manifesto. The Party has promised that it would advance constitutional reform with the input of the citizens themselves. In its manifesto, it was noted that it was important that the people participate in something as critical as revising the supreme law.
During the swearing-in ceremony of Cabinet Ministers, President Ali committed to having this done. He had boasted that his team of Ministers have skillsets and experience that are of immediate importance, as his Government moved to tackle imperative issues such as constitutional and electoral reform, among other things. That commitment was reiterated by the President last month, during the 28th anniversary of the return of democracy.

“My Government remains committed to upholding and protecting democracy. We intend to fashion a more inclusive system of governance and, especially, to fortify our democratic institutions so that never again will our people’s freedom be subject to the threat of being hijacked,” Dr Ali had said.
Meanwhile, Attorney General Anil Nandlall has said that the Government would use the standing committee on constitutional reform and conduct nationwide consultations, in order to drive forward the reform process.