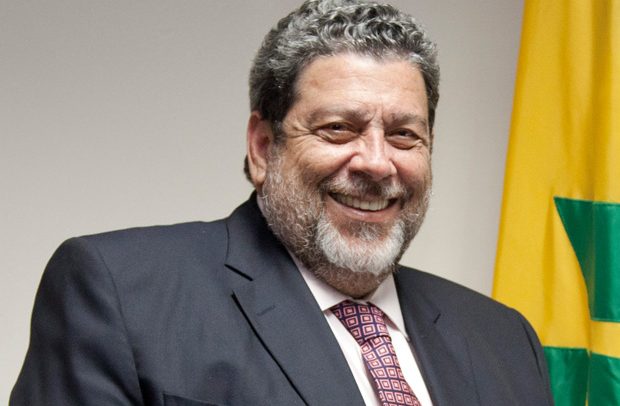 Prime Minister of Saint Vincent and the Grenadines, Dr. Ralph Gonsalves, yesterday assumed the Chairmanship of the Caribbean Community (CARICOM) during a virtual conference, even as de facto President of Guyana, David Granger was absent from online regional event.

During the Special Meeting of the Conference of the Heads of Government, held virtually yesterday, the new CARICOM Chair stated that the challenges of nature and the global political economy must serve as driving forces to build a stronger, better CARICOM. While he acknowledged that the union was “far from perfect”, and that there were both possibilities and limitations in the design of the integration movement, Prime Minister Gonsalves praised the Community’s impressive achievements. His tenure follows that of Prime Minister of Barbados, Mia Mottley, whom he praised for her “brilliant leadership”.

Present at that virtual conference was the Prime Minister of St, Kitts and the Nevis, Dr. Keith Mitchell; Prime Minister of Saint Lucia, Allan Chastanet; CARICOM Secretary-General, Irwin La Rocque; Belize Ambassador to CARICOM, Lawrence A. Sylvester; and Vice-Chancellor of the University of the West Indies, Sir Hilary Beckles; among other heads of governments, ambassadors and regional dignitaries.

Even as Gonsalves acknowledged that the union was “far from perfect”, and that there were both possibilities and limitations in the design of the integration movement, Prime Minister Gonsalves praised the Community’s impressive achievements.

“Our CARICOM has chalked up impressive achievements in its four pillars of integration: functional cooperation, coordination of foreign policy, security collaboration, and economic integration, including Single Market trading arrangements. But the design of CARICOM itself highlights its possibilities and limitations… CARICOM was conceived and fashioned as a Community of independent, sovereign states entirely combined to pursue a series of objectives, measures and tasks,” he said.

That design and practical functioning of CARICOM meant that some “enduring problems” had not been solved. Those challenges included regional governance, institutional political representation and non-automaticity of financing regional institutions including the CARICOM Secretariat, he pointed out.

Prime Minister Gonsalves said that the quickening pace of the challenges of nature and the global economic challenges had made it imperative that “we build a CARICOM that is better and stronger” while recognising its inbuilt and operational limitations.

CARICOM, he maintained, was central to the Region’s salvation given the explosion of pandemics, climate change and matters of global political economy. On that note, he singled out Community Institutions for praise, including the Caribbean Public Health Agency (CARPHA), the Caribbean Disaster Emergency Management Agency (CDEMA), CARICOM IMPACS.

“The heroic contributions of CARPHA, IMPACS, CDEMA – all CARICOM Institutions – and the RSS, a sub-regional security umbrella, is a sufficient testimony in this regard. Accordingly, I reiterate our profound gratitude to the regional public servants at CARICOM, the OECS and at all allied regional institutions,” Mr. Gonsalves said.

Accepting the Chairmanship of the Community with “humility and enduring obligation”, he listed his priorities as, COVID-19 and interconnected-ness to health, the economy, society and security; coordination of regional air transport; socio-economic recovery of the Region; strengthening the Region’s resilience against multiple vulnerabilities; shaping a new, more inclusive global order; and uplifting the Caribbean civilization.

Notably, even as CARICOM is headquartered in Guyana, the country’s Head of State, President David Granger, did not take part in the meeting. Instead, de facto Foreign Affairs Minister Karen Cummings sat in for the President.
In her remarks, Cummings offered no excuse for Granger’s absence.

“I wish to place on record,” Cummings said in her brief address, “on behalf of His Excellency David Granger, President of Guyana, sincere appreciation to the Honourable Mia Amor Mottley, Prime Minister of Barbados, for her earnest and energetic efforts to enhance regional integration during her tenure as Chairman of the Conference of Heads of Government of the Caribbean Community.”

She went on to praise Mottley’s “exemplary leadership”, highlighting the Barbadian PM’s role in tackling a variety of issues, from economic concerns to the region’s COVID-19 response. She closed by welcoming the incoming Chair: “We join other delegations in welcoming the new Chairman of Conference, Dr. the Honourable Ralph Gonsalves, Prime Minister of St. Vincent and the Grenadines. We assure him of the support of the Co-operative Republic of Guyana during his tenure of office.”

It should be noted that both Mottley and Gonsalves had come under brutal attacks from the Granger administration and its supporters for their position that the CARICOM-scrutineered GECOM elections recount accurately reflected the outcome of the polls. The certified validated recount figures show the opposition People’s Progressive Party/Civic (PPP/C) winning the election with 15,000 votes ahead of the Granger coalition, while Granger has come out in support of altered figures produced by GECOM Chief-Elections-Officer, Keith Lowenfield, showing the Coalition winning by removing a total of 115,000 votes – most awarded to the PPP/C – from the recount figures. Following a statement by Mottley last week questioning under “what executive fiat” Lowenfield had acted, Coalition membership engaged in a social media campaign of derogatory attacks on the outgoing Chair. Granger himself had accused Gonsalves and Mottley of interfering, despite previous commitments to respect CARICOM’s role in the process.

The new Chair took the time to defend his predecessor in light of those attacks. “Her helpful initiatives,” said Dr. Gonsalves, “to assist in the preservation of democracy in Guyana within the terms of the CARICOM Charter Civil Society will be long remembered despite unwarranted, vulgar and opportunistic criticisms of her from assorted jaundiced sources who ought to know better.”

According to the rotation schedule prepared and shared by CARICOM, PM Gonsalves will assume the CARICOM chairmanship for six months, after which the Prime Minister of Trinidad and Tobago will assume the title.
Kaieteur News reached out to the President’s press advisor, Arianna Gordon, for an explanation regarding why Granger was absent from yesterday’s proceedings but no response was given.