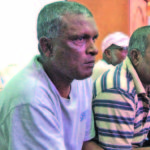 The Guyana Livestock Development Authority (GLDA) and the Guyana Sugar Corporation (GuySuCo) are coming in for harsh criticism after a group of farmers on the East Coast of Demerara accused the entities of abuse.

The cattle farmers are calling on the relevant authorities to intervene after GLDA and GuySuCo revoked their leases for lands at Mon Repos, ECD.
Together, the farmers rear about 100 heads of cattle and recently met with former Attorney General Anil Nandlall, in an effort to have their issues addressed.
Nandlall told Guyana Times that the farmers signed a Memorandum of Understanding (MoU), which clearly outlined that the Authority needed to give them at least six months’ notice before they could be evicted. However, this is not the case since the farmers are yet to receive official correspondence from the entities.

“One morning they wake up and they saw contracts with heavy-duty equipment bulldozing the land, cutting down the grass and they are now being told that the land is being prepared for house lot allocations by the Central Housing and Planning,” Nandlall related.
The former Attorney General accused the Government of attempting to close down the farmers for a while now.
“Now their lives are under threats I supposed. They have nowhere to graze, no grass to eat and now the Government hasn’t seen it fit to consult with them or to give them advance notice so that alternative arrangements could have been made. It is that this government has unleashed a war with farmers,” he said.

One of the farmers, Jadoonauth Singh, who has been rearing cattle for over 20 years, is calling on the relevant authority to look into this issue since his livelihood depends on it.
“I am calling on them to come out and reach the farmers. If they can prepare back land and give we, and we can start back with the farming. We need… or let them start bulldozing the land right away there and prepare we gate; let start getting our land going for our animals,” he pleaded.

The revoking of the cattle farmers’ lands by the entities as well as the Mahaica-Mahaicony Abary/Agricultural Development Authority (MMA-ADA) is nothing new.
Earlier this year, a group of West Bank Berbice cattle farmers moved to court to challenge a decision made by the MMA-ADA) to evict them from land they have been occupying for over 20 years and to allocate various portions to other persons.

Initially, the farmers were issued with a letter dated January 18, 2019 from MMA-ADA ordering them to vacate the land by February 1, 2019, and according to the notice, from that date those animal farmers would have been deemed illegal.
That letter also ordered the farmers to dismantle all erected structures and to remove their cattle from the lands. The farmers objected to this move, claiming that they have been rearing cattle on the lands for more than a decade and while the MMA-ADA says it is redistributing the land legally for the purpose of cattle rearing, no offer was made to those existing farmers for occupancy. Efforts to contact GLDA and GuySuCo for a comment on the matter proved futile.