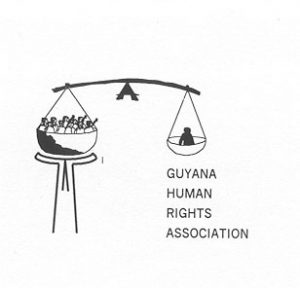 “The Chairperson of GECOM now holds the future of Guyana in her hands. It is no longer a question of what she wants to do but what she must do – NOW!”

That statement began a plea by the Guyana Human Rights Association (GHRA) to GECOM Chair, Justice Claudette Singh, to take the reins of GECOM and ensure that the electoral process is concluded in a credible, swift and transparent manner. The association said that Chief Justice Roxane George-Wiltshire has given the GECOM Chair sufficient legal cover to do so, though it states she doesn’t actually need such legal cover.

“It is her solemn duty. Is there anyone who would object to a re-tabulation in a fair and transparent manner? NO? Then Madame Chairperson, the GHRA urges you to get on with it. You have the support of the vast majority of Guyanese at home and overseas who would like to continue saying: I am Guyanese and proud of it.”
Presently, the CARICOM-supervised recount, intended by David Granger and Bharrat Jagdeo, is obstructed from commencing, as there are a series of interim injunctions granted by the Court, which effectively prevent it.

Still, GHRA complained that “four interminably long weeks has passed with no end in sight other than one which portends disaster for Guyana as a nation and, more importantly, quite unnecessary hardship for its people.”
It stated that, instead of simply being allowed to exercise their voting franchise peacefully, the people of Guyana have been subject to the pain, shame and embarrassment of the prospect of international sanctions.
Compounding that issue, GHRA said, is the destructive impact of COVID-19, for which Guyana has thus far recorded eight cases.

“The GHRA is constrained to posit whether this unseemly hesitation to complete the voting tabulations for Region 4 is worth such a price! Have we as a people become so politically blinded that we are prepared to endure such humiliation and sacrifice in the cause of ensuring political victory. Surely not!”
It said that it has been silent up until now about the political situation.

However, “the GHRA has therefore been silent not because it is in disagreement with those voices of reason that have sought to focus on the essential issue at hand. Regrettably those voices and the views they have expressed have been drowned in the posturing of what is good for Guyana, in the endless regurgitation of the errors of the political leadership since Independence and in the many prescriptions – with respect to shared governance for example – for a better Guyana.”

While the association acknowledges the value of such discourse, it said that those are misplaced in the present context as they serve to deflect from the only relevant issue, i.e., the tabulation of the votes cast in the Region Four general and regional elections, and the manner in which this is done.
“The GHRA feels emboldened to speak out now, to point to the irrelevance at this point in time in focusing on recriminations regarding Guyana’s political behaviour and on prescriptions for a better Guyana in the years ahead.”