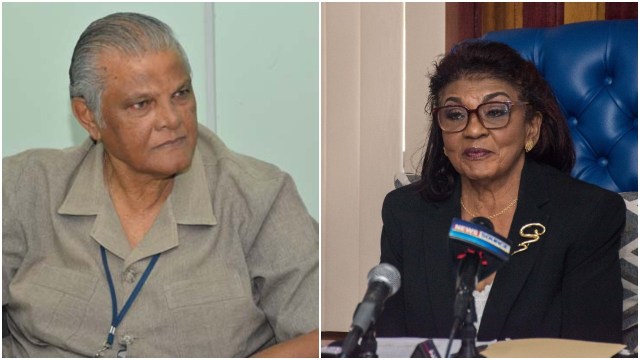 Joseph Singh is calling on the current Chairperson, retired Justice Claudette Singh and Chief Elections Officer (CEO) Keith Lowenfield to undertake a verification of the Statements of Poll for Region Four (Demerara-Mahaica), since to do otherwise would be courting disaster.

This is according to the former GECOM Chair, who in a public missive at the end of the week said: “to deviate in District Four, from a process that was reportedly applied relatively smoothly in the nine other districts, and to treat apparently dismissively with the genuine concerns raised by the contesting parties, as well as those raised by local and international accredited Observers, is to court disaster.”

According to the former Chief-of-Staff of the Guyana Defence Force and presidential advisor, “I hold no brief for any political party but am an advocate for the right of every citizen to have his or her vote accurately attributed to the political party of choice and for the accurate tabulation, verification and declaration of the results”.

Singh said to do otherwise is “to taint the democratic process with allegations of fraud, to insult the intelligence of Guyanese, and to incur the criticism and sanctions of the international community.”

He posited that such a scenario will exacerbate the lack of confidence in national institutions, betray the inviolability of the Constitution and set a poor example to the younger generations of Guyanese.

“More immediately, it will fuel tensions among supporters of the political parties whose expectations have been raised and those who will feel cheated.”

According to the former GECOM boss, “arbitrary decisions that are based on self-interest and which are patently inconsistent with the Constitution, will take us down a slippery slope of confusion and chaos that will have far-reaching consequences for our plural society and for Guyana’s future.”

The former GECOM Chairman in his appeal to “the Chair and Commissioners of GECOM and to the leadership of the contesting political parties” said they must ensure that verification of the Statements of Poll and the Declaration of the results by the Returning Officer, District Four, and the Official Declaration of Results of the 2020 National and Regional Elections by the Chief Elections Officer, be in compliance with the relevant Act and the Constitution of Guyana.”