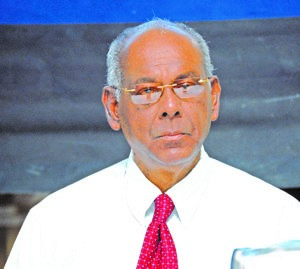 The 15-day deadline referenced in the Representation of the People Act, within which the Guyana Elections Commission (GECOM) must announce results for a General and Regional Elections is directory and not mandatory.
As such, the “swearing-in of the President after the 15-day deadline will attract no legal consequences.”

This is according to former Speaker of the National Assembly, Senior Counsel (SC), Ralph Ramkarran.
He gave his views over the weekend in a public social media platform and argued that the 15-day deadline is clearly “directory” and not “mandatory.”

These are interpretations by courts of the effect of timelines when provided for in legislation, according to Ramkarran.
The Presidential Candidate for the recently formed A New and United Guyana (ANUG) qualified his position further, saying when a timeline is “directory,” no consequences arise if it is violated.
General and Regional Elections were held on March 2, 2020, which means GECOM has until tomorrow, to give a final declaration of the total results.

Cautiously optimistic
With a nationwide recount with specific focus on Region Four (Demerara-Mahaica), GECOM would likely miss the 15-day deadline, which Ramkarran has since dismissed as directory and not mandatory.
Speaking to the controversies surrounding the counting of the votes for Region Four, Ramkarran welcomed the initiative by President David Granger and Opposition Leader Bharrat Jagdeo, to have a recount.
According to ANUG’s Presidential Candidate, “this agreement is of tremendous importance to Guyana because it may help to resolve the impasse over the election results, the fabrication of which threatens to plunge Guyana once again into undemocratic rule and international sanctions.”

He said ANUG is cautiously optimistic about the recount which would be overseen by Caribbean Community (Caricom) experts, led by Prime Minister of Barbados, Mia Mottley.
According to Ramkarran, ANUG is conscious of efforts that have been made to count the votes and declare the results and that “several of these efforts have been done in blatant violation of court orders.”
As such, “the public will understand when we declare that we are deeply fearful and suspicious that the APNU/AFC will utilise every effort, including intimidation, to derail the effort of Caricom.”

Ramkarran reminded that ANUG had requested a recount within the stipulated time but, as is to be expected, all requests for recounts were rejected.