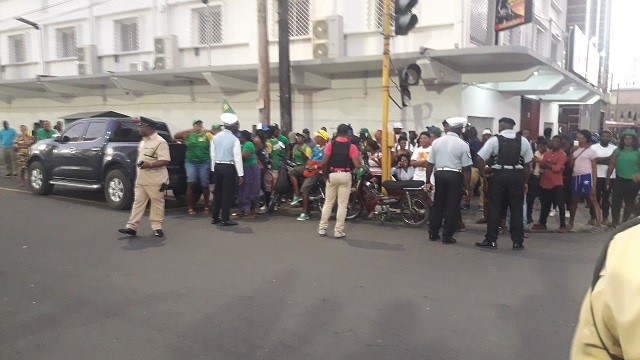 The coalition supporters chanted intermittently their campaign slogan “Forward Ever, Backward Never,” after the opposition People’s Progressive Party (PPP) and observers, such as the Guyana Bar Association, charged that a spreadsheet surfaced after the Returning Officer, Clairmont Mingo fell ill and was rushed to the Georgetown Public Hospital where he was treated and sent away. The verification of Statements of Poll was suspended briefly, but when it resumed a clerk used a spreadsheet allegedly giving APNU+AFC extra votes of 100 or more at several polling stations. “The errors no doubt are arithmetic,” said Chief Elections Officer, Keith Lowenfield.

When the discrepancies were uncovered because the numbers on the spreadsheet did not match the Statements of Poll, the verification process was halted for several hours.

After PPP General Secretary Bharrat Jagdeo rushed down to the Returning Office, followed closely by American, British and European Union ambassadors, the issue was resolved shortly after 6:30pm. Jagdeo and Lowenfield later reemerged, saying that the seven-member Commission agreed to use the Statements of Poll again and abandon the use of the spreadsheet. “We agreed at the end of the day that we’ll do the verification using statements to statements so I take out my statement, you bring your statement, we go through the numbers on the statements; their continues to be errors, there is a procedure, as prescribed for us to do that. If, at the end of the day, that doesn’t work, the CEO will be involved with his statement to have a resolution to the issue,” Lowenfield said.

Jagdeo and British High Commissioner to Guyana, Greg Quinn also separately told reporters that the issue was resolved and the verification process would entail the use of the Statements of Poll.

Jagdeo reluctantly stated that his party obtained an unassailable lead against its main rival, the incumbent APNU+AFC. He did not provide details, saying he did not want to violate a multiparty code of conduct which, among other things, guards against declaration of results before GECOM. “It’s more than the majority the last government had… and significantly more,” Jagdeo said.

APNU+AFC, in a statement on Tuesday, also claimed victory in Monday’s polls that pit its 74-year-old David Granger against the PPP’s Irfaan Ali.

“All our internal projections are positive and indicate that we will be returned to government for a second term to continue the work of building and developing Guyana,” the coalition stated.

General Secretary of A New and United Guyana (ANUG), Timothy Jonas appealed to APNU+AFC leaders to go out and calm down their supporters.”There needs to be a leader from APNU who comes down and says to his supporters, ‘this is not the way to do this, wait until the results are announced’,” Jonas said.