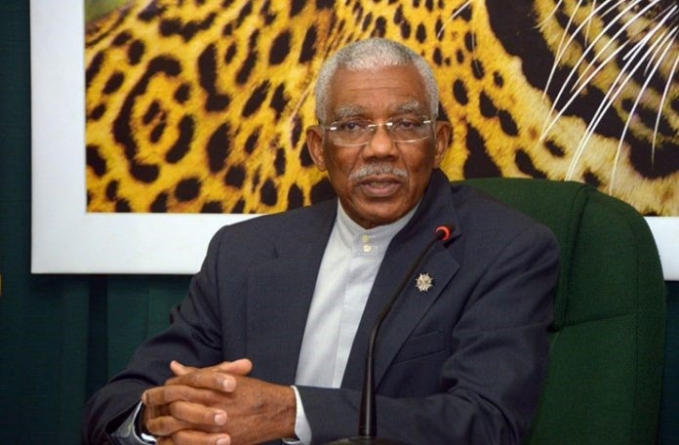 President David Granger has stated that the fruitful meetings of CARICOM Heads of State with political leaders of Guyana has led to the agreement that the Guyana Elections Commission (GECOM), as an independent body, is responsible for delivering to Guyanese the results of the 2020 General and Regional Elections.

To date, the complete declaration of these results has not been made which has contributed to tension countrywide. CARICOM Chairman, Prime Minister Mia Mottley of Barbados and Prime Ministers Dr. Keith Rowley of Trinidad and Tobago; Roosevelt Skerrit of Dominica; Keith Mitchell of Grenada and Ralph Gonsalves of St. Vincent and the Grenadines travelled to Guyana for two days to mediate disagreements between the Government and Opposition.

FRUITFUL VISIT
The President, in a release yesterday, said he was satisfied with the outcome of his meetings with the CARICOM Heads noting that their presence was “non-intrusive” and thorough, with their last meeting ending at 01:30hrs on Thursday morning.

“CARICOM plays a very important role. Not only is the headquarters of CARICOM in Guyana, Guyana was of course a founding member of CARICOM. The five Prime Ministers from Barbados, Dominica, Trinidad and Tobago, St. Vincent and the Grenadines [and Grenada] came to Guyana and they were honest. They were committed to working with Guyana and the stakeholders in Georgetown and the rest of the country to craft a path forward out of the present situation,” he said.

“They were fully engaged and they worked very hard and aimed at getting a solution to the present situation. I would say it was successful. I was very happy with the outcome and in general terms, we met with former President Jagdeo and we agreed that on Thursday, the two sides, [the] Government side and the Opposition side of the Elections Commission would meet and work out some way of implementing, fully, the ruling of Chief Justice Roxane George” he added.

The President further stated that it was agreed by himself and Opposition Leader, Bharrat Jagdeo that the process should remain in the hands of the Elections Commission which should meet and decide how it would implement the Chief Justice’s ruling.

While the tabulation of Region’s Four Statement of Polls (SOPs) recommenced on Thursday as ordered by Guyana’s Chief Justice, President Granger maintained that such a meeting of the appointed commissioners was important to pave the way forward. He pointed out: “I understand that a similar request was made by the nominees of the Opposition side. My understanding is that a meeting did take place and the process that was prescribed by the Chief Justice did commence. I know at some stage or the other it was suspended but I feel that coming out of the CARICOM Heads of Government proposals, the meeting did take place and I think that was the way to go.”

ALLOW GECOM TO WORK
The Guyanese Head of State maintained that there was no interference by external agents in the role of the Elections Commission, and, that, even in the disagreements between political parties, GECOM must be allowed to function without interference.

The Commission is set to recommence the tabulation of SOPs belonging to Region Four today at 09:00hrs following a breakdown amongst stakeholders on Thursday at the office at High and Hadfield Streets.