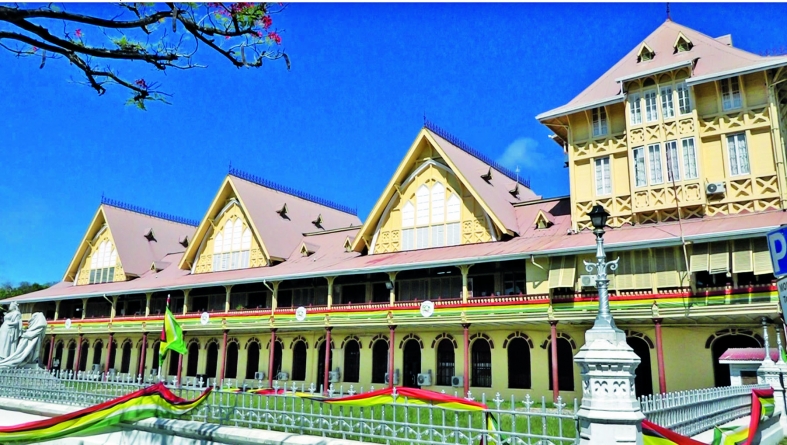 The Guyana Elections Commission (GECOM) is divided on whether the Statements of Poll (SoPs) for Region Four (Demerara-Mahaica) should be tendered as evidence as litigation over the declaration of the March 2, 2020 General and Regional Elections drags out in court.

This position was articulated on Monday after an in-chambers hearing by Justice Franklyn Holder on whether to consolidate two injunctions recently filed in relation to the election results.
The first relates to an application by Opposition Leader Bharrat Jagdeo and Reaz Holladar to set aside the results declared by Region Four Returning Officer (RO) Clairmont Mingo as null and void, and a second case brought against the Commission by Ulita Grace Moore to prevent a recount of the Region Four votes.
Justice Holder has since acquiesced to having the matters consolidated and heard as one – with the consent of the litigating parties.

While there was agreement over the ‘joining’ of the cases, GECOM’s Neil Boston vehemently objected to an application by Attorneys for Jagdeo who sought a discovery, to have the SoPs tendered as evidence.
Addressing members of the media, Boston said, “…no, no, no, no, we are not going to do that; it’s only the elections judge could ask for that.”
He subsequently briefed media operatives on the sidelines of Monday’s hearing and was adamant that the electoral body would not be handing over SoPs, since the court did not have jurisdiction to make the request.

Suspicious
GECOM Commissioner Sase Gunraj was, however, adamant that the Commission was yet to meet to determine a position and further questioned why the Commission would not want to have the documents tendered as evidence.
He told members of the media there were stringent objections by the representatives of GECOM and the Chief Elections Officer (CEO), Keith Lowenfield.

“I want to ask the question why. Why is there a very stringent and violent almost objection to the disclosure of those documents that are in the possession of the CEO?”
Confronted with the argument that the hearing before the court was not an election petition, Gunraj countered, saying “it matters not; citizens who vote have a right to proper and transparent processes for the declaration of the results and SoPs, which are the conclusive evidence of the results of those elections, of course, are, I believe an entitlement of electors who participated in the process.”

He disclosed further “that as a commissioner who is sworn to uphold the tenets of the Constitution and who has the responsibility to the citizens of Guyana –who own this process – I believe that application should not be met with such objections, it should be facilitated.”

The GECOM Commissioner was adamant that elections and their results are an “obligation to the people and the information that is held there is the people’s information and it should be given to the people”.
Pressed on the legal standing for the SoPs to be tendered, Gunraj reiterated: “In my capacity as Commissioner, I don’t believe that those documents should be hidden.”

Asked about GECOM’s defence in the matter, Gunraj disclosed to media operatives that the Commission has not met “and as far as I am aware no defence has been formulated or presented on behalf of GECOM”.
Justice Holder will today hear arguments for and against the admissibility of the SoPs in the litigation.
The parties will on Wednesday and Thursday file submissions and responses with a likely final determination over the weekend.

Jagdeo and Holladar are being represented by Senior Counsel Douglas Mendes and Attorney-at-Law Anil Nandlall.