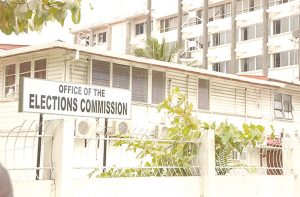 The Guyana Elections Commission (GECOM) has further delayed the verification of Statements of Poll for Region Four (Demerara-Mahaica).

While several other regions have completed their activity and declared their respective results, the Returning Officer for Region Four Clairmont Mingo last night claimed tiredness and pulled the plug on the exercise. The intention was to resume this morning.

However, INews understands that the process has been further delayed. The verification is being done at the RO’s Office, Ashmin’s Building, Hadfield and High Streets, Georgetown.

The building also hosts the Guyana Elections Commission’s Media Centre for the 2020 General and Regional Elections.

“This Returning Officer cannot be oblivious to the urgency which is attached to the conclusion of this exercise. Almost all of the other regions across the country which are affected by various factors, such as distance, rough physical terrain and other logistics in respect of transmission of the SOPs have concluded this very exercise. Yet District No 4, where almost all of the SOPs are in, the exercise is yet to complete,” Nandlall contended.