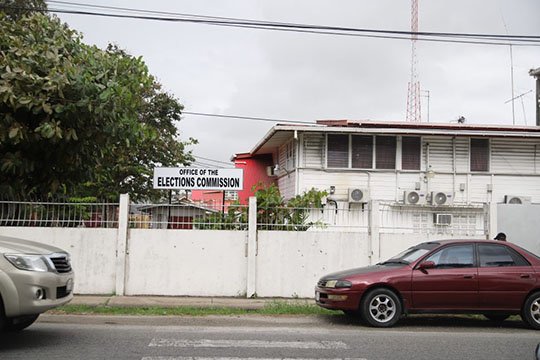 The Guyana Elections Commission (GECOM) has condemned a “malicious” attempt to accuse its staff of destroying electoral information in relation to the contested Region Four results.

In a release on Wednesday, the commission stated that it has been made aware of an email purporting to be sent by Personal Assistant to the Chief Election Officer (CEO), Duarte Hetsberger, in which it was alleged that he destroyed electoral information and presented a substituted declaration of the Region Four results.

“The contents of the fake email with attachment being circulated are not authentic and should be disregarded as no such act was committed by Mr. Hetsberger,” GECOM’s Public Relations Officer (PRO) said in a release.

“The commission views this recent malicious act not only as a personal attack on Mr. Hetsberger and the integrity of the Chief Elections Officer, but also an attempt to create mischief and confusion. Persons are therefore urged to be vigilant and do not allow the misinformation peddled by a malicious few to cause distraction and chaos.”

GECOM, in a statement on Sunday, had given its assurance that it will not flout the laws of Guyana, reminding the public that a mandatory injunction granted against it and CEO Keith Lowenfield impedes the finalisation of its work.

“It is important for all relevant parties and members of the public to note that while GECOM is a constitutional agency, it is still subjected to the Laws of Guyana; hence the mandatory injunction granted against the commission and Chief Elections Officer on Thursday, March 5, 2020, has affected the finalisation of the commission’s work at this point,” GECOM Chair, Justice (ret’d) Claudette Singh, said in a statement on Wednesday. According to GECOM, while it is unfortunate how things have escalated, it is their intention to abide by all legal and procedural requirements to conclude its work.