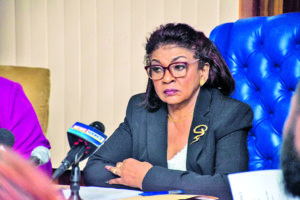 Importantly, Singh’s decision will show she is sticking to the recount which shows a win for the PPP/C and not Lowenfield’s most recent report which fraudulently sets a win for APNU+AFC.

Singh cited the ruling of the Caribbean Court of Justice when she gave the instruction to the CEO. Lowenfield has thrice before refused to deliver the recount result. It is unclear what will be different about today’s decision.

This majority decision came after hours of deliberations.

All six commissioners were in attendance at the meeting of the Guyana Elections Commission today which was intended to make crucial decisions on the fate of the recalcitrant Chief Election Officer (CEO) and the way forward in relation to the certification of the results of the March 2nd general elections.

Sources tell Stabroek News that a motion was informally placed before the meeting for Lowenfield’s dismissal.

The meeting got underway just after 10 am and continued until just after midday. It continued briefly at 2.30 pm. On Saturday, the three government-appointed commissioners were absent and so the scheduled meeting could not proceed.

Lowenfield’s defiance of explicit instructions by the GECOM Chair to present the results of the recount have seen mounting calls for his summary dismissal and a temporary appointment for the completion of the process.

Lowenfield’s report was the subject of much of the discussions this morning.