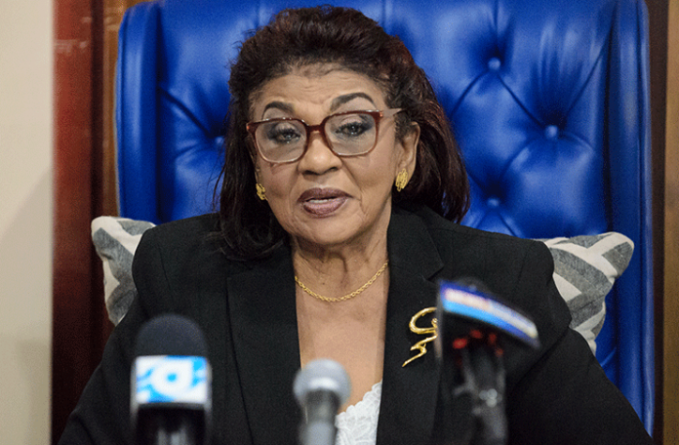 Polls for the March 2, 2020 General and Regional Elections were off to a smooth start as reported by the Guyana Elections Commission (GECOM) with Chairperson Justice Claudette Singh (ret’d) looking forward to having an “incident free” day.

She voted early in the morning, then made several visits to polling places to ensure operations were running smoothly.
She had days ago announced that GECOM was ready to produce free, fair and credible elections. And so were the people.
They started to wake up hours before the polls opened, much to the dismay of late sleepers, beckoning to their neighbours, family and friends, in some areas, to get out and vote.

In some parts, persons banged pots, pans, while others blew horns. Some even spoke of persons walking the streets calling out to sleepers, “Wake up and vote!”

News coverage touched parts of the East and West Coast Demerara, East Berbice, the Essequibo Coast and Georgetown, Bartica and Linden. If the turnout and enthusiasm in these areas were a fair portrayal of the entire country, then it meant yesterday’s election lived up to its reputation as the ‘mother of all elections’.

Kaieteur News reporters said that some polling places drew crowds even before the polls opened; eager to get it done.
Several observer missions set out to provide coverage for all ten administrative regions. Kaieteur News met with representatives of the Carter Centre, the European Union (EU), the Commonwealth Group, and the Organisation of American States (OAS), who all relayed that they were pleased with how the process was going.

GECOM, at its first press conference held at 10:00 hours at the media centre on Hadfield and High Streets, reported that so far, there were no major issues experienced countrywide.
Several minor issues were highlighted but these were quickly sorted out and did not adversely affect the smooth voting process.

According to Justice Claudette Singh, the Chairperson, there were two minor hiccups during on her examinations of the polling places.
At St. Gabriel’s Primary School in Queenstown, Georgetown persons using wheelchairs and others with disabilities were unable to properly access the polling stations located in the upper flat. This issue was quickly resolved.
Persons also raised concerns about the ink being ‘too light’ but were reassured that the ink would later become dark as it dried.

Chief Elections Officer, Keith Lowenfield, in his remarks reported that voting across the region commenced at 6:00am with the exception of Cashew Island with only eleven voters.
Lowenfield explained that the location of the island prohibited the early start of polls there but voting kicked off at 9:00am.
On his review of polling places, two key reports were made. In Crane village, West Coast, Demerara, an elector came out to vote but was told that she already voted. But after several checks, this was not so and the woman was allowed to vote.

The same issue surfaced at a polling place in Ruimveldt, Georgetown but this was also quickly resolved.
Public Security Minister and prime ministerial hopeful, Khemraj Ramjattan, assured Guyanese that the Guyana Police Force is ready and fully equipped to address security concerns as they come to light.

He made these comments moments before casting his ballot with his wife and other family members at the Rama Krishna Primary School in Kitty. Ramjattan told reporters that strong systems are in place to ensure that Election Day 2020 concludes safely.

In addition to Ramjattan and his family, Kaieteur News also photographed other candidates voting, including Presidential candidates David Granger, Irfaan Ali, Rhonda Lam-Singh and Lenox Shuman and Prime Ministerial candidate Mark Phillips.
Kaieteur News visited the close of polls around Georgetown and it turned out that people really did come out in their numbers early on. There were no reports of lines built up at 18:00 hours when polls closed.

At the final press conference for the day last night, the Chair said, “It was indeed a grand day. It was a day all of Guyana was looking forward to… I am very pleased today.”
Singh urged that the media in their reports on the matter do not sensationalise any of their stories.
“We’re in a charged atmosphere so we have to be careful how we go about spreading stories. We must always verify our stories before we publish them… These things can escalate into mistrust, and even violence.”

True to the Chairperson’s words, there were many reports of irregularities occurring during the electoral process; many were not supported by evidence.