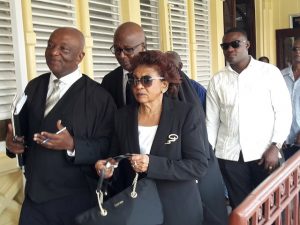 The Chairperson of the Guyana Elections Commission (GECOM), Retired Justice Claudette Singh and the Chief Elections Officer, Keith Lowenfield are at odds over whether the seven-member body can order a recount of votes cast in general and regional elections earlier this month.

Singh, through her lawyer Kim Kyte-Thomas, said in High Court papers that the seven-member GECOM can constitutionally order a recount if it believes there are irregularities in the counts conducted under the supervision of the Returning Officers. “Once there is evidence that the electoral process was compromised then to ensure the impartiality, fairness and compliance with the provisions of the Constitution or of any Act of Parliament the commission is constitutionally mandated to intervene to ensure public confidence in the electoral process,” she said.

The GECOM Chairperson, through her lawyer, further argued that with or without the formal agreement between President David Granger and Opposition Leader Bharrat Jagdeo, the Commission has “separate and independent powers” under the constitution to supervise the electoral process.

“This means that the commission can order a recount,” said Kyte-Thomas.

Noting that the Returning Officer for Region Four refused several requests for recounts for “varying reasons” but the Commission can intervene to correct this even at this stage, the GECOM Chairman said the commission has two options—accept the Chief Elections Officer’s report in keeping with the Representation of the People Act or order a recount of the votes cast. “Thus, it would be unlawful for the court to direct the commission on the way forward to complete the process where these issues are still outstanding,” she said.

But, Attorney-at-Law Neil Boston, who is representing the Chief Elections Officer, contends that after the High Court is settled, GECOM could not recount the votes. “They can’t do that. To do that is unlawful. There is an election court that will have to review all the evidence by the persons who were there to determine whether there was some unlawful act or omission which affected the results,” said the lawyer.

Representative of the People’s Progressive Party’s (PPP) List of Candidates, Bharrat Jagdeo, through Attorney-at-Law Anil Nandlall welcomed the GECOM Chairman’s submissions. “Those are very positive submissions made to the court by the Chairperson herself and I believe that it will lend a far way in resolving the dispute because the dispute essentially is: should the recount not be granted, having regard to everything that has transpired or are we going to use the court as a legal cover not to do a recount when everyone is requesting a recount is a mandatory facility by the law and recount will address definitively all of the matters or most of the matters of controversy,” he said.

Nandlall said he and other members of his legal team would appeal Friday’s decision by High Court Judge, Franklyn Holder that he has jurisdiction to hear a request for a judicial review of GECOM’s now halted decision to conduct a recount of the votes cast on March 2. Relying on the Representation of the People Act that bars a court from enquiring into decisions by the seven-member GECOM, Nandlall said the appeal might go all the way to the Caribbean Court of Justice (CCJ).