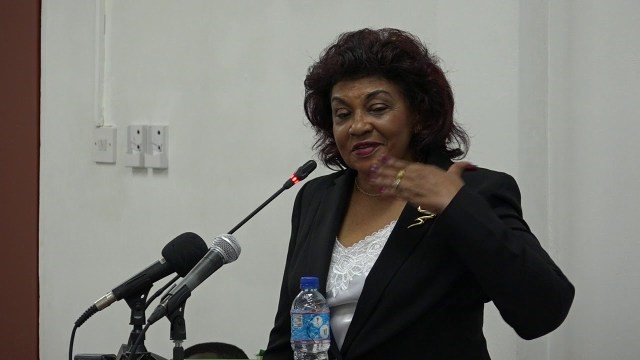 Chairperson of the Guyana Elections Commission (GECOM) retired Justice Claudette Singh has written to the Leader of the political Opposition, Bharrat Jagdeo, to inform him that the electoral body will not be taking any further steps with regards the announcement of the 2020 General and Regional Elections, until the determination of the ongoing court hearing.

The position was communicated by way of a letter to the Opposition Leader, following a correspondence by Jagdeo, outlining formally, concerns over the declarations of the Region Four (Demerara-Mahaica) electoral results.

Jagdeo, in a letter to the Chairperson on Saturday, noted that under the guidelines in Section 83 of the Representation of the People Act, the ballots had been counted and Statements of Poll (SOPs) generated, each of which was carbon copied to political parties.

He was adamant that based on those SOPs, the People’s Progressive Party/Civic (PPP/C) had won the elections by a margin of more than 15,000 votes.

According to Jagdeo, in relation to district/Region Four, the verification process catered for under Section 84 (1) of the statute, did not run smoothly and was interrupted intermittently for various reasons including illness, exhaustion or unavailability of elections officials.

He noted too that on one occasion, the process had been stopped by the need to locate about 20 SOPs, in relation to votes which had been recorded on a spreadsheet by the Chief Elections Officer (CEO), Clairmont Mingo, for Region Four.

According to Jagdeo, “those votes purported to represent the votes recorded in the corresponding Statement of Polls but they were far different from the carbon copies of Statement of Polls which the counting agents had in their possession.”

Formally lodging his complaint with the election’s authority, the PPP’s General Secretary and Opposition Leader noted that by this time only 421 of the 879 ballot boxes had been verified using the stipulated process provided for in the Representation of the People Act.

According to Jagdeo, the RO—Mingo—subsequently announced that he had a declaration despite the fact that the verification process in accordance with the laws had not been resumed and this led to an uproar at the RO’s Office at the Ashmins building.

The Opposition Leader in his missive called on the Chairperson to resume the verification process in accordance with the provisions of the law, voluntarily and without prejudice to the pending proceedings.

Justice (retd) Singh responded by saying, however, that the matter in light of the court proceedings is ‘sub judice’ and that the Commission will have to await the outcome of the litigation before taking its next step.

Jagdeo had charged too that a request for a recount has been submitted to the RO and that should the Commission not find favour with resuming the verification process then it should proceed with an immediate recount, without prejudice to the pending court case.

The Opposition Leader also demanded of the GECOM Chair that Mingo and the Commission preserve the original SOPs for Region Four.