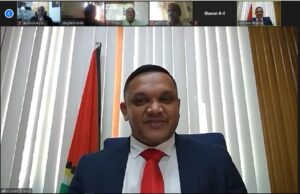 Government’s gas-to-energy project is set to see development of new sectors and boost local traditional industries.
Natural Resources Minister Vickram Bharrat on Wednesday so indicated to regional and international officials during the Caribbean Region Virtual Networking Event, organised by the US Commercial Service Trade Americas Team.
Delivering on the topic “Opportunities in Guyana’s natural resources sector with a focus on Oil and Gas development”, Minister Bharrat said the gas-to-energy project will not only bridge the gap between the new oil and gas sector, but enhance the local traditional sectors, such as enabling local farmers to add value to their produce for export.

The Government’s gas to energy agenda envisions the transformation of cheap, reliable, and clean energy not only for domestic use, but for processing, manufacturing, and other value-added downstream activities. This in effect will make Guyana a hub for a variety of industries for the supply of goods and services globally.
A recent “desktop review” on the feasibility of bringing gas to shore from the Liza-1 well in the Stabroek Block found that the project could produce between 30 and 50 million cubic feet per day of natural gas, and is expected to supply nearly 70 per cent of Guyana’s current energy demand, thereby reducing the country’s dependence on imported fossil fuels.

President Dr Irfaan Ali has already appointed a Special Advisory Committee, which is currently conducting studies to validate the most suitable location, access to grid and availability of land with the Expressions of Interest for potential investment in early 2021.
Minister Bharrat said the development of Guyana’s petroleum sector also highlighted the growth of the macro economy.

“Guyana is a dynamic and integrated economy, and the advancements of the oil and gas sector will allow for the integration of economic activities for all other sectors of the local economy. The emerging hydrocarbons economy is already allowing for the growth of our local Private Sector, as well as a greater influx of foreign direct investments,” he told the webinar.

The Minister said the business sector has been rapidly changing to facilitate greater investments since the discovery of first oil. “It is for this reason that President Ali’s Administration is focusing on strong institutional and regulatory frameworks to encourage both foreign and local investors,” he said.
Bharrat further stated that this was being done not only for oil and gas exploration, development, and production, but also for all related services and goods that could be produced and sourced from Guyana.
The Caribbean Region Virtual Networking Event commenced on December 1 and ended on Thursday.