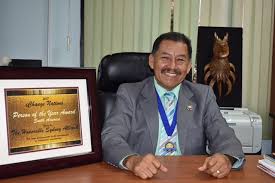 Leader of the Guyana Action Party (GAP), Second Vice President and Minister of Indigenous Peoples Affairs Sydney Allicock, believes that the recent US sanctions have stemmed from a quest to control Guyana’s oil wealth. GAP is one of the smaller parties that make up A Partnership for National Unity (APNU).

Allicock, in a telephone interview with Kaieteur News, said that “before the discovery of oil” the United States government and by extension, the ABC countries have had “little to no interference in Guyana’s affairs.” The minister further expounded, saying that since the discovery of oil these countries have been fighting to gain control of the country’s wealth. These attempts, he argued, were heightened recently due to Guyana’s political situation.

Allicock, expressing his disappointment in the manner in which the US government has acted throughout the electoral process, noted that “for a country claiming to be under a democratic rule should have known better.” He added that “they have been bent on acting as though they are still in the era of Columbus” as evidenced by their interventions and threats of sanctions. Allicock said that with the exploitation of its oil resources, Guyana has been plunged into a state of division, reiterating that the US government is bent of taking advantage of the situation by threatening to place sanctions on Guyana through the revocation of visas.

Allicock, who was awarded the Anthony N. Sabga Caribbean Award for Excellence in 2010 for his contribution towards environmentally sustainable tourism, noted that his party and by extension the Indigenous people of Guyana are very much aware of the vastness of Guyana’s natural resource. He believes that Guyana’s Natural Resources belong to the people of this country and that the arrangements for the exploration of oil should be relooked and further exploration initiatives halted until a suitable solution can be found to end the upsurge of division among Guyanese citizens.

When asked about the implications these sanctions might have on Guyana as a whole, the minster responded by saying that “it will only take a toll on the weak-hearted”, adding that Guyana has enough to offer its people and that sanctions can act as a catalyst for “industrious individuals to create strategies that will push Guyana towards independently developing its self.”
The minister, in his final remarks, encouraged Guyanese to stand strong in unity for a better Guyana.