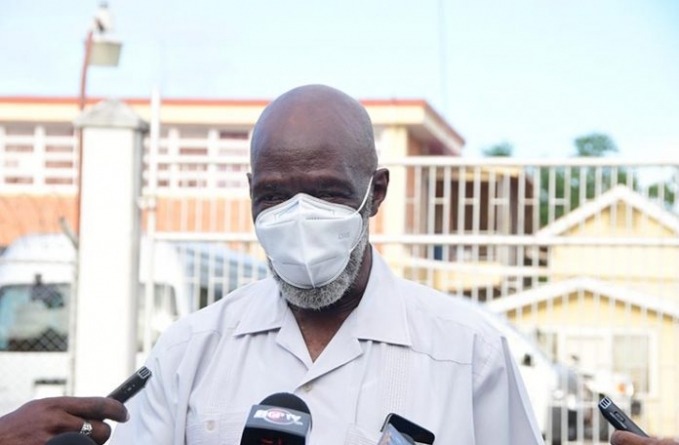 EVEN as the Chief Elections Officer (CEO), Keith Lowenfield has been ordered to submit an Elections Report at 14:00hrs today, Elections Commissioner Vincent Alexander has made another case for a non-declaration of General and Regional Elections.

Alexander, the country’s longest-serving Elections Commissioner, had made a case in June for the nullification of the March 2, 2020 General and Regional Elections, given the enormous amount of irregularities and cases of voter impersonation that had been unearthed during the National Recount. But the Chairman of the Guyana Elections Commission (GECOM), Justice (Ret’d) Claudette Singh, had said that the Commission does not have the powers of a Court to examine and re-examine witnesses, or to procure official documents to determine the truth of the allegations.

Alexander has said, however, in a booklet that the position taken by the GECOM’s Chair is flawed.
He explained that the Chief Registration Officer, by virtue of Regulation 40 of the National Registration Act, is entitled to the periodic receipt of information on citizens departing from and returning to Guyana. Further to that, he said GECOM routinely receives reports on deaths for the purpose of deleting the dead from its Register.
Alexander submitted that none of the circumstances require individuals to appear before the Commission, since the procedures are administrative and routinely authorised. As such, he said there would be no issue of GECOM usurping the powers of the Court.

Further, Alexander said that while it has been argued that irregularities arising from the recount process can only be remedied by the High Court, in keeping with Article 163 (1) of the Constitution, careful perusal of the Article would reveal that it could only be activated following the conclusion of the electoral process.
“Election 2020 has not been concluded, thus Article 162 of the Constitution and Section 22 of the Election Law (Amendment) Act were invoked to overcome the difficulties that had arisen during the course of the elections. All that is contained in Order 60 of 2020, which originated from the invocation of the Constitution, and the Election Law (Amendment) Act, is therefore what GECOM has been empowered to do to remove the difficulties,” he reasoned.
While conceding that Article 162 does not confer the specific power of annulment, Alexander argued that it does empower GECOM “to take such action as appear necessary or expedient to ensure impartiality and fairness”.
In support of his position, he referenced the case of Gladys Petrie v. Attorney- General (1968), which addresses the issue of illegalities or omissions affecting the election and or the result.
Similarly, he said, the National Assembly (Validity of Election) Act could only be invoked at the conclusion of the electoral process, and as such it is not applicable to the current situation.

According to him, it is “ludicrous” to think that Article 163 supersedes and ousters Article 162, when Article 163 could only be invoked within 28 days of the declaration of the Elections result.
“All that we are left with is the adherence to the Order in a purposeful manner, by returning to Section 96 of the Representation of the People Act by adherence to Clause 14 of the Order: ‘Determine whether it should request that the Chief Elections Officer to use data compiled in accordance with Paragraph 11 as the basis for the submission of a report under section 96 of the representation of the People Act Cap 1:03,’” Alexander said. On that basis, he made a case for a Non-Declaration.

He submitted that the degree of corruption unearthed during the National Recount is so grave that it is “impossible” for the Commission to declare a result.
“I posited then that only a new election could ensure the enfranchisement of the eligible voters, and the determination of the result based on the value of the individual eligible votes cast,” Alexander said. “Since then, many pundits, home and abroad, have expressed their views on the need for a Declaration; and what should be declared etc. I am therefore, herein, rearticulating my pre, peri and post- elections positions, in an effort to separate myself from the ‘wannabe knowledgeables’, since my articulation would be facts-based and dismissive of the contentions of many of the pundits,” he wrote in his booklet.
In doing so, he pointed to five primary facts: That the Official List of Electors is significantly bloated, having a voting population of 660,998 persons when the country’s population is 750,000; the bloated list is as a result of the thousands of Guyanese who died or migrated but were not removed from the National Register of Registrants Database (NRRDB); and the National Recount confirmed that unscrupulous people voted in the place dead and persons who were out of the jurisdiction.
“In 2006, impersonation was detected at Strathspey, on the East Coast of Demerara. It was reported to the Chief Election Officer, who undertook to investigate the matter but never did. In 2011, at a Polling Station at the school on Eccles Old Road, impersonation was detected, and again in 2020 at a Polling Station at Line Path, Skeldon impersonation was detected,” the Elections Commissioner pointed out.
Further, he said that notwithstanding plans by GECOM to cleanse the NRRDB, the country went into the 2020 Elections with the bloated list, and on Elections Day, a large number of persons were voting, using the Oath of Identity rather than an Identification Card or Passport. “This, for me, was a red flag. GECOM had done everything possible to make Identification Cards available to registered voters,” Alexander posited.
On the issue of the recount, Alexander said that while it has been argued that it was numerical in nature, the Order which triggered it provides for much more than “rudimentary things”.
On the basis of his initial position that no voter should be disenfranchised, and only valid votes should be counted, Alexander said the solution to the challenges currently before the Commission is for a non-declaration, and a for a new process to be initiated that reaffirms the enfranchisement of all, and negates the impact of fraudulent votes.