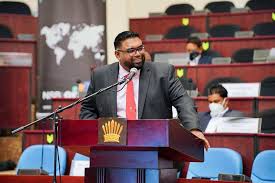 President Irfaan Ali  on Sunday night announced that his administration would be working to provide free education at the University of Guyana by the end of 2024.

The Head of State was at the time delivering a virtual address at the Guyana’s 50th Republic Awards Ceremony and Cultural Presentation organised by the Guyana Consulate in Canada.

President Ali told his audience that his Government is working on creating a 21st century education system in the country.

“We are providing 20,000 scholarships.  We hope to provide free education at the University of Guyana by the end of 2024.  In our Emergency Budget for 2020, we made provisions for doubling the uniform allowance and increasing, by 50%, the cash grant per student from $10,000 to $15,000.  We are committed to increasing this by almost 300% in the coming years,” he was quoted as saying in an Office of the President news release.

University of Guyana students can pay cash or through student loans from the Ministry of Finance.

If the Guyana government makes good on this promise, it would come months ahead of the next general and regional elections scheduled for 2025. By then, Guyana hopes to earn at least US$5 billion from oil.

Last week President Ali told residents of the mountainous community of Kato in Region Eight (Potaro–Siparuni), that they would oon receive an Information Communication Technology (ICT) hub in their community, which will provide internet access.

The President, who had also announced the re-introduction of the One Laptop Per Family Initiative from 2021 during that visit, again mentioned it this evening as he underscored his Government’s hope of providing all Guyanese students with the necessary tools to prepare themselves for a competitive future.

Education is free from nursery to secondary levels at all state-run schools.  There are several privately-owned schools whose tuition fees are in many instances as costly as tuition fees at the University of Guyana.