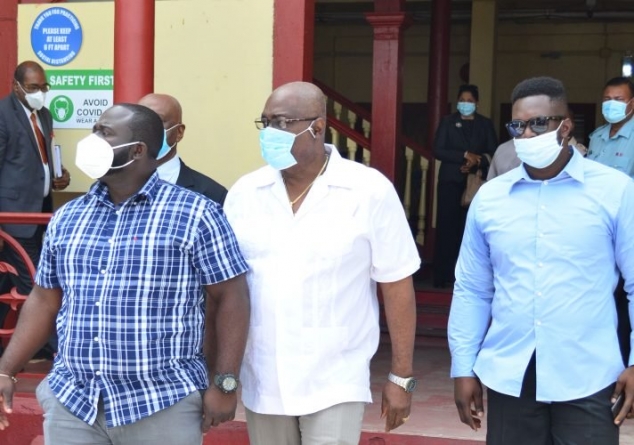 Chief Election Officer Keith Lowenfield was released on $450,000 bail this morning after he was formally read private criminal charges alleging fraud and misconduct in his handling of the results of the March 2nd elections.

Lowenfield appeared before Principal Magistrate Faith McGusty in Georgetown, where three indictable charges were read to him.

It is alleged by Daniel Khanai, of The New Movement, that between March 5th and June 23rd, 2020, Lowenfield conspired with a person or persons unknown to commit the common law offence of fraud by representing to the Guyana Elections Commission (GECOM) that tables attached to his June 23rd elections report accurately reflected the true results of the elections in order to materially alter the results, with intent to defraud as he knew the tabulation to be false.

The second charge, attested to by Desmond Morian, of the opposition People’s Progressive Party/Civic (PPP/C), alleges that Lowenfield, while performing his duty as CEO, without lawful excuse or justification, willfully misconducted himself by ascertaining results of the elections “knowing the said results to be false.”

The third charge alleges a conspiracy to commit a felony. It is alleged that between March 5th and June 23rd, Lowenfield conspired with a person or persons unknown to commit fraud by representing to GECOM that the tables in his March 14th Elections Report reflected the true results of the elections, knowing that the tabulation was false, in order to materially alter the results of the elections.

Prosecutor Glenn Hanoman told the court that while there was no objection to Lowenfield being granted bail, it should be a substantial amount since he was seen as a flight risk due to the serious nature of the charges. Hanoman also raised concerns about Lowenfield potentially trying to destroy documents which will serve as evidence in the matter.

Hanomann subsequently asked to have a month’s time to acquire some 800 witness statements.

Lowenfield’s attorneys, Nigel Hughes and Neil Boston, made a bail application. Hughes sought to have self bail as he challenged the notion that his client could be a flight risk. He also said that Hanoman needing time to gather witnesses suggested that Hanoman had no clear evidence against his client.

The magistrate granted Lowenfield $150,000 on each charge and adjourned the matters until August 14th for report.