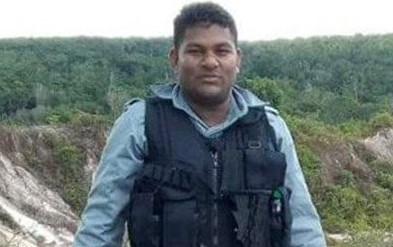 Motie Dookie, former Head of the Special Weapons and Tactics (SWAT) Unit who was implicated in the smuggling of 30 cases of whisky in 2017 was dismissed from the Guyana Police Force after an inquiry into the allegation found him guilty.

This was confirmed by Chairman of the Police Service Commission (PSC) Paul Slowe who told Stabroek News that Dookie’s dismissal was effective from December, 31, 2019.

“…..The tribunal set up an inquiry into the allegation, the tribunal found him guilty and he was dismissed,” Slowe recently told Stabroek News.

Dookie was travelling in a minibus along the Whim Public Road, Corentyne, on December 30th, 2017 when it was stopped by a police anti-crime patrol and the 30 cases of whisky were found aboard.

At the time, Dookie and the driver of the minibus were the only occupants of the vehicle. The police have said that the Dookie indicated that 10 cases of whisky were in the minibus and they were to be used for a party. However, a search of the minibus revealed the 30 cases, which were all seized.

In late 2018, Dookie was charged departmentally under the Police (Discipline) Act.

Aside from a fine not exceeding ten days pay, the Act allows for admonition, a reprimand, a severe reprimand, the award of extra duties and fatigue not exceeding four hours in every 24 hours, confinement to barracks for any period not exceeding 28 days with or without drill, reduction in rank and dismissal from the force. These forms of punishment are delegated by the Commission and are subject “to such conditions as it thinks fit.”

The PSC has the power under the Constitution to exercise disciplinary control over persons holding the rank of Inspector and up.

Dookie was sent on “Special Leave in the Public Interest” in May, 2018.  He mounted a legal challenge and won. In September, 2018, Justice Fidela Corbin-Lincoln, who heard Dookie’s application for relief, granted him a writ of certiorari, quashing then acting Police Commissioner David Ramnarine’s decision, which she declared unlawful.