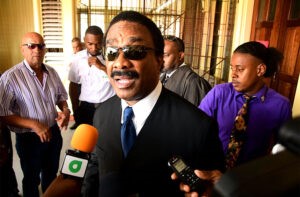 Auditor General, Deodat Sharma has reported in his 2019 report that former Attorney General, Basil Williams charged taxpayers $99.6 million for legal and retainer fees in 2019, the year following the No Confidence Motion.
In his report, Sharma said that the fees were racked up despite the fact that the office has a Solicitor General, one Deputy Solicitor General, two Assistant Solicitors General and six State Counsels in its employ.

The monies were paid to three law firms and seven external attorneys-at-law, the report stated. Sharma said that a special investigation was being conducted into legal fees expended at the time of drafting of the Auditor General’s 2019 report.
2019 was the year immediately after the December 21, 2018 No Confidence Motion. Though the vote should have resulted, according to law, in the fall of the government and elections within three months, the David Granger administration carried out a sustained legal war in opposition, which went all the way to the Caribbean Court of Justice (CCJ).

When the new administration took over, Minister of Legal Affairs Mohabir Anil Nandlall pointed to enormous spending of tax dollars and the no confidence cases, as well as the elections related cases which were litigated in 2020.
“The Coalition should have been paying for the cost out of party coffers,” Nandlall had said.
Nandlall outlined that for the case against the Coalition’s unilateral appointment of the Guyana Elections Commission (GECOM) Chair, the former Attorney General retained two Barbadian Queen’s Counsels, Hal Gollop and Ralph Thorne. Together the two lawyers were paid approximately $10M for their services.
“This doesn’t include hotel and accommodation that are all in the retainer contract …that I will have released later,” he said

Further as it relates to Ralph Thorne, Nandlall said that again he was paid with $4.2M in state funds to represent the former AG in his private capacity in a case where he was sued by the former Solicitor General, Prithima Kissoon.
In the no-confidence motion cases, Nandlall pointed to a battery of lawyers who earned big bucks.
Among them, Nandlall said, was attorney-at-law Maxwell Edwards who was paid $4M for his participation in the No Confidence case; Senior Counsels, Rex McKay and Neil Boston who represented Compton Reid, a farmer from New Amsterdam who had challenged the no-confidence motion in his private capacity – they were paid $12M by the Attorney General’s Office; and Dr. Francis Alexis, Q.C from Barbados was paid $5M in the same case.

In another instance, Nandlall pointed to a case where attorney-at-law, Roysdale Forde, SC, appeared on behalf of the former Minister of Finance, Winston Jordan, in a private case. Forde is now an APNU+AFC opposition member of Parliament.
In this case, the AG explained that Jordan had sued now Minister of Public Works, Juan Edghill in his private capacity, “but here again, a lawyer is being paid from the state‘s purse over $1.7M.”
Other invoices, Nandlall said, related to payments for attorney-at-law, Mayo Robertson, who also represented the Coalition’s interest in a number of recent elections’ cases.
“He was also paid for the no-confidence case $1.9M, an additional $1M in another case involving the AG and Anil Nandlall and the sum of $600,000 in another matter,” he said.