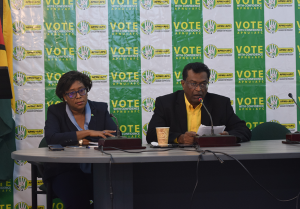 Amid tension and high emotions around the March 2, 2020 General and Regional Elections, the Alliance For Change (AFC) has emerged with a damning allegation that the Opposition People’s Progressive Party (PPP) has attempted to tamper with the integrity of the Elections results with the help of foreigners.

These allegations were put forward by the Prime Ministerial hopeful and Public Security Minister, Khemraj Ramjattan and Executive Member of the AFC, Cathy Hughes yesterday at APNU+AFC Campaign Headquarters on Lamaha Street.
Ramjattan said that the allegations were only being publicly released because it was leaked to the media, and according to him, the foreign nationals were sent back to their respective countries on elections day.
“This is an extremely important development. I don’t know how the press got wind of it, but it is killing me to know what is happening.”
He disclosed that they are still “hazy” on the situation.
Ramjattan reported that on E-Day, the Guyana Police Force arrested three foreign nationals who were allegedly meeting with leading members of the opposition at the Marriott Hotel.
The three individuals were identified as Libyan National Marwan Al-Ayed, US National Brent Kartcher and Russian National Vadim Kyrillov.

A fourth National, said to be Russian-American, is reportedly still on the run.
Police reportedly seized a number of flash drives, computers, tablets, and other electronic items from the men. Those items have been lodged.

Ramjattan relayed that they were forced to deport the foreign nationals after their “intelligence realized that there was some conspiracy to tap into GECOM’s computer system”.
“We can only say that far,” he stated, but he did not stop there.
He pointed fingers directly to Opposition Leader, Bharrat Jagdeo who, according to him, from intelligence received, was speaking directly with the Russians.

“The connections are straight to the PPP, because even from our intelligence, Bharrat Jagdeo was talking to them via phone…He was talking to them in Russian…We know he is very fluent in Russian.”
When asked what this “intelligence” was, Minister Ramjattan replied “Intelligence means intelligence.”
“There is a certain wall that we can’t…you want a photograph or the listening device and all that? You have to trust your security agencies.”

Fingers were also pointed to a member (name given) of the American Chamber of Commerce (AmCham) who reportedly met with the opposition and the foreign nationals at the hotel.
Further, he noted that when the men were taken into police custody, they told investigators that they were employed by oil giant ExxonMobil.

But the party debunked this claim, since no ExxonMobil lawyers contacted the police for their release.
According to Ramjattan, “known PPP lawyers were the ones making the calls.”
“The minute we sent them and deported them on what we got, and I wouldn’t tell you what we got, it was PPP lawyers and not Exxon lawyers that were calling for them.”
Ramjattan explained that neither the Russian Embassy nor the American Chamber of Commerce (AmCham) was made aware of the allegations.

Ramjattan stated that he took an “executive decision” to keep this from the public’s eye, with the knowledge that such heavy allegations could be explosive at such a tense time in Guyana.
Executive Member of the AFC, Cathy Hughes fully supported Ramjattan’s decision to not disclose the allegations, citing that such reports could have been explosive on elections day.

“Can you imagine the chaos that would have ensued if this was available on Monday? We can assure you that Minister Ramjattan and the requisite agencies were all notified, all sprung into gear, and all active.”