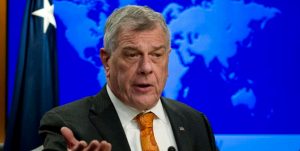 The US State Department has come forward with another statement warning Guyana of the consequences that would follow if it announces official elections results based on a flawed tabulation.

Again, the message is coming from Acting Assistant Secretary for U.S. Department of State’s Bureau of Western Hemisphere Affairs, Michael Kozak.
In a tweet posted yesterday, Kozak said that GECOM has the responsibility to ensure that all votes in Guyana’s 2020 General and Regional elections are counted.

He continued, “Any announced result that does not reflect a credible vote count and the will of the Guyanese people will damage the Guyanese government’s standing in the international community.”
Kozak has before made similar statements warning Guyana that the legitimacy of the Guyana government is paramount to its wellbeing.

A strong statement also came from US Secretary of State Mike Pompeo that the individuals who seek to benefit from electoral fraud and form illegitimate governments/regimes will be subject to a variety of serious consequences from the United States.