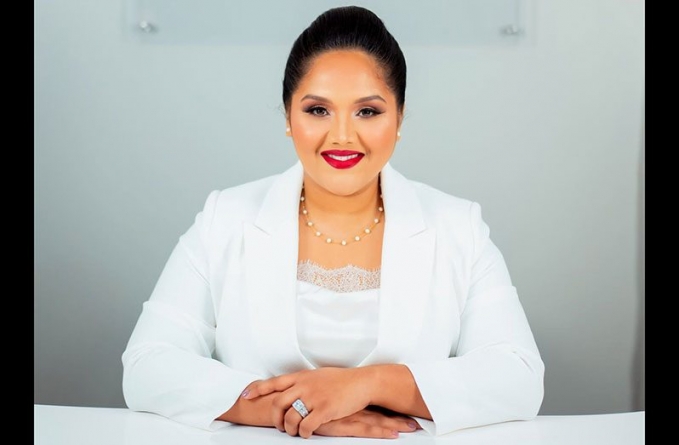 GUYANA’s youngest and newest First Lady, Arya Ali, recently shared with the nation, a tragedy which no mother should have to face – losing a child.
In a sit-down interview, aired on the News Room on Sunday, Mrs. Ali disclosed that she lost her second son while seeking medical assistance overseas during the period when Guyana was embroiled in a bitter dispute over the March 2, 2020 general and regional elections.

“At that time, I was pregnant with my second son and it was a devastating time actually because of the elections uncertainty and then my child not making it into the world. He died at five months,” First Lady Ali disclosed.
She suffered this loss without the physical comfort of her husband, now President, Dr Irfaan Ali, and her one-year-old son, Zayd. Added to that, COVID-19 hit Guyana and the borders were closed.

“It was a hard time, I left the country two days just before the borders closed and I was stuck for three months overseas and there was no Irfaan, there was no Zayd; my mom wasn’t even at my side when I really needed them. That was a hard time for me,” the First Lady recalled.
During the early days of her pregnancy, Mrs. Ali learnt that her unborn child was suffering from a heart condition and so, she travelled to a medical facility overseas.

“I found out that he had a heart condition and I needed to seek overseas medical attention. When I got there with the whole COVID and all things were delayed, so he just didn’t make it. I couldn’t even bring him back home. So it was very hard.”
While still coping with the death of her unborn child, Mrs.Ali took up office as Guyana’s ninth First Lady after her husband was declared the winner of the elections, five months later.

Recalling the events of the declaration, Mrs. Ali said she was in a state of disbelief since there was so much uncertainty during the elections process.
The First Lady admitted that taking up her new post was a challenge since she never had so many eyes on her.
“It’s been four months, and I must say it’s a learning experience and there is so many emotions I can talk about, but to put it in a nutshell, it’s somewhat taxing, it can be very overwhelming.

I do get frustrated, if there was a manual that said how to be a First Lady, I’d love to get my hands on one of those. There are so many challenges but they are so many great outcomes as well and I hope one day I can be someone a young girl can aspire to be.”

AN ADVOCATE FOR PERSONS WITH DISABILITIES
The First Lady has several projects on her agenda and is currently working in phases to execute them.
“I am very much passionate right now about our beautification projects…because I feel right now, we are going to have an influx of tourists and with foreign investors coming into the country, I find that we need a face lift and we need to be welcoming with our hospitality going side by side with how Guyana looks.”

The First Lady also outlined her plans for companies and members of the general public to be more considerate and to employ persons with disabilities.

“I find that that particular group is very vulnerable and they need a lot of attention. How I look at it, is that they need the income to make them independent; it is not a case where they don’t want to work, it’s just that business are not willing to employ those people.

I am here and I’m advocating that each business at least hire one differently-abled person.”
She added, “There are quite a few large companies who are willing to tap into that project but I know that there is room for more.”

The project, she added, “will give the children a little bit more than what is being offered on a daily basis.”