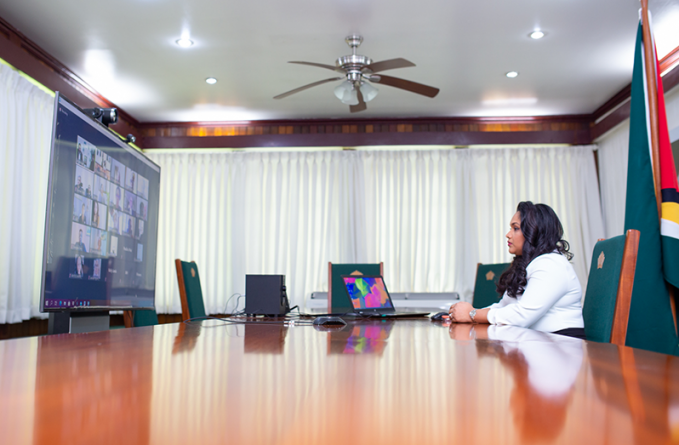 FIRST Lady, Arya Ali, on Saturday, participated in the first of a series of meetings organised by the Dubai Vigilance Group (DVG) to reflect on the role of women in today’s society.

The meeting, which was initiated by Her Royal Highness Sheikha Afra Dalmook of Dubai, was the first of its kind between the UAE and leaders of the Caribbean Community and Common Market (CARICOM).

It was held under the theme: “A moment of reflection for women in this current state of global affairs.”
The inaugural discussion sought to create a foundation for the building of a clear and defined partnership between the UAE and the Caribbean, as the two seek to deepen their relations.

In this regard, two ideas were proposed and will be up for discussion in the coming weeks. The first is the establishment of a UAE-CARICOM Women’s Association; and the second, the formation of a Caribbean-Dubai Chamber of Commerce.

These initiatives are expected to be the starting point of a robust relationship between the two parties.
During the discussion, Her Royal Highness, Sheikha Afra Dalmook, reflected on the role of women, their journey, and accomplishments over the last few decades.

She highlighted that women can be the compass for success since they are the centre of gravity of each society.
She also noted that in order for women to overcome current challenges which they face, strong commitments must be made to ensure that women are put at the centre of development.

For her part, First Lady Arya Ali believes that women across the world continue to navigate societal challenges which disproportionately affect them, and restrict them from climbing the social and economic ladders.

She is of the unwavering view that serious work must be done to increase opportunities for women and respond to their changing needs.
To support these commitments, the First Lady intends to champion several causes which are aimed at providing social and economic support for women and other vulnerable groups across Guyana.

One such initiative involves the provision of start-up capital for micro and small scale businesses owned and operated by women.
The First Lady believes that women must have access to the same kind of resources and opportunities to guarantee not just their participation, but their survival in an increasingly competitive global economy.