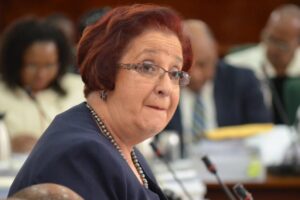 Describing the termination of employment of former Permanent Secretary within the Ministry of Amerindian Affairs, Sherie Samantha Fedee, by Minister of Parliamentary Affairs and Governance, Gail Teixeira, as an outrageous usurpation of the powers of the Public Service Commission (PSC), President of Guyana Public Service Union (GPSU) Patrick Yarde, has called for the official to be given back her position.
In a letter to Teixeira, Yarde outlined that Fedee is a career public servant with over 25 years of unbroken service and who was confirmed in the position this year by the PSC.Yarde explained that the former PS brings a wealth of experience to the position having joined the public service in November 1995.

“She has risen from the position of Clerk to Personnel Officer to Senior Personnel Officer and then to Deputy Permanent Secretary, after which she succeeded to the position of Permanent Secretary in 2019. She was confirmed in the latter position in 2020 by the Public Service Commission,” Yarde said.
He called Fedee’s termination by Teixeira “an abuse of her authority and a most outrageous usurpation of the powers of the PSC.”

The GPSU Head stressed, too, that in accordance with Article 201 of the Constitution, Fedee’s appointment falls under the jurisdiction of the PSC.“It is only the Public Service Commission that is vested with the authority to remove Ms. Fedee from her public office of Permanent Secretary and such removal to be done in accordance with the PSC rules.”
He added that since Fedee’s appointment was not revoked by the PSC, she should therefore be reinstalled.

In the circumstances, Yarde said that the union expects that Fedee’s remuneration and other benefits are available to her during and after the conclusion of her leave and that she returns to active duty at the status of Permanent Secretary, unless she concurs with any change that is proposed to her.