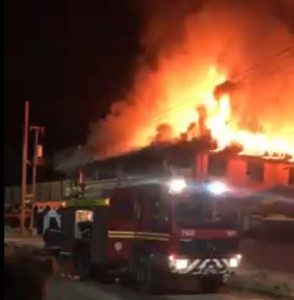 The Region 10 office of the Guyana Elections Commission located in Wismar was early Tuesday morning destroyed by fire, police said.

The cause of the blaze was not immediately known.

A senior police officer in the Region 10 Division told News-Talk Radio Guyana 103.1 FM/ Demerara Waves Online News that the fire started at about 1:30 AM and was contained about two hours later.

There were no reported injuries.