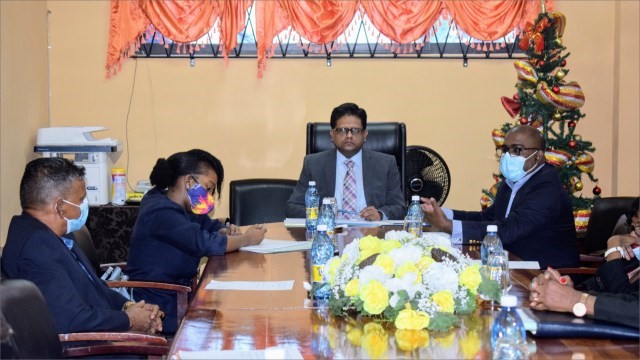 Senior Minister within the Office of the President with responsibility for finance, Dr Ashni Singh has tasked the new Board of Directors of the National Insurance Scheme (NIS) to ensure the timely processing of claims and payment of benefits.

Furthermore, he urged the new Board to work towards returning the entity to financial viability.

This is according to a statement from the Ministry of Finance, which noted that the minister would have attended the maiden meeting of the new Board.

“Over the last several years, we have seen the progressive decline of the Scheme. The NIS faces a number of challenges at the macro level and has come under severe threat. It is therefore going to take a lot of work to return the Scheme to long term financial viability,” the Senior Minister expressed.

According to the statement, the minister also emphasised the level of importance his Government has placed on NIS, reminding the Board that pensioners and retirees look forward to their pension in a timely manner while current contributors expect to receive their benefits promptly.

Minister Singh related the government’s grave concern at the number of complaints received from contributors about delays in receiving their benefits and entitlements, sometimes as a result of incomplete records of their contributions to the Scheme.

As such, he tasked the Board with addressing this problem immediately, with a view to ensuring that public satisfaction with the level of service provided by the NIS improves urgently.

Just over a week ago the Minister announced the appointment of former Private Sector Commission (PSC) Chairman, Mr. Ramesh Persaud as new Chairman of the NIS Board. Mr. Persaud is also currently the Chief Executive Officer (CEO) of the Institute of Private Enterprise Development (IPED) and also serves as a member of the Guyana Sugar Corporation (GUYSUCO) Board. The other members of the Board are Ms. Holly Greaves (ExOfficio), Mr. Faizal Jaffarally, Ms. Yvonne Pearson, Mr. Maurice Solomon, Mr. Satanand Gopie, Ms. Kathleen Jason, Mr. Seepaul Narine and Ms. Jillian Burton-Persaud.