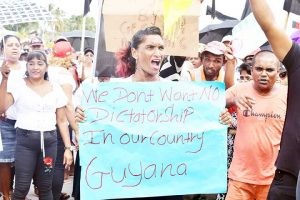 Today, the electoral fight continues between the two major political factions—The People’s Progressive Party and the APNU+ AFC Administration—to see which will rule Guyana, the world’s latest oil producer with resources so significant, it is often described as the “mother of dragons…”

The two parties are currently before the High Court to settle issues regarding the credibility of declared results for Region Four. But the sequence of events that led to this saw several local and international commentators noting that the 2020 General and Regional Elections spell disturbing signs of the dreaded ‘oil curse’. On the other hand, some observers have said that the proceedings are a manifestation of a deep-seated problem which the fight to govern an oil rich Guyana has merely made naked once more.

In an invited comment, Attorney-at-Law Timothy Jonas unequivocally stated that this talk of the ‘oil curse’ unfolding is nothing but a red herring. For the Chairman of the A New and United Guyana (ANUG), which contested the 2020 elections, the real subject at hand is ethnic voting. “That is our history,” he said while adding, “We have a winner-takes-all system.”
Another observer who shared Jonas’ sentiments was Executive Member of the Working People’s Alliance (WPA), Dr. David Hinds. The newspaper columnist contended that the issues citizens are witnessing in the 2020 General and Regional Elections run deeper than the perception that the oil curse is unfolding.

Dr. Hinds said, “…Guyana’s inherent ethnic problems form the stumbling block against good governance and we have seen it play out in this elections. That stumbling block will become a curse in the era of oil. And so it raises the question of how we solve what is clearly an endemic problem before it takes a toll on the country in the era of oil and gas.”
He did agree that like many other countries, Guyana does have issues as it relates to the management of oil. Dr. Hinds insisted, however, that the fundamental problem is Guyana’s inability to become a “real nation”.

“What these elections have shown is that we are a pre-nation and not a full-fledged nation and there is no way that we are going to be able to extract from the multinationals, the full benefit of our patrimony while we are a pre-nation,” the politician expressed.
He opined as well that the new oil finds have done nothing but further expose the real problem. Dr. Hinds said, “We have the oil finds but the problem is that we have not negotiated for the benefit of all but as representatives of half of the nation. This is irrespective of whether it is the PPP or the Coalition. This has been our real curse…”
In his contribution to the discourse, Former Presidential Advisor on Petroleum and international consultant, Dr. Jan Mangal said that the 2020 General and Regional Elections has exposed a problem that holds a combination of issues.

Dr. Mangal said Guyana is witnessing a symptom of its historical issues with good governance as well as those that oil and gas can bring in such conditions. He was keen to note however that even if oil was not in the picture, Guyana would have had electoral problems “but oil just intensifies existing issues.”
The former Presidential Advisor said, “…And that is why I have always said, before we can move forward with oil, we need to fix our existing problems. Our failure over the last 50 years was not due to an absence of oil, and oil will not be the main factor for our success.” Dr. Mangal argued that the only thing that can save Guyana is respect for “process” and laws.

Expounding further, Dr. Mangal said that any party, which does not respect the electoral process will not help Guyana move forward with oil. In his view, the current issue with the deviation from the prescribed process for tabulating some of the votes is a critical test. He stressed that once a legitimate process is followed, one endorsed by all the international observers, then the loser must accept defeat.  “If that means the PPP or the Coalition is the next government, so be it, and we will have our work cut out for us in monitoring how they behave with oil.”
Dr. Mangal further noted his disappointment with the manner in which the 2020 General and Regional Elections has unfolded. He stressed however that this is definitely not a good omen for Guyana’s oil sector while adding, “A weakened country cannot be successful with oil and if it is seen as undemocratic then it cannot fully benefit from its resource…”
During her contribution to the discussion, Chatham House Associate Fellow and Petroleum Governance Expert, Dr. Valerie Marcel was keen to note that the arrival of oil wealth increases the stakes of an already “high-stake elections”. Dr. Marcel said, “There is a perception on both sides that the other won’t take care of ‘their folks’, that they won’t benefit from the oil wealth unless ‘their party’ wins. [Furthermore], the acrimony and violence erupting last week only increases that perception that there are winners and losers— not just the politicians standing for office but all the people they represent.”

The Petroleum Governance Expert asserted that each Party needs to reassure all Guyanese that there are no losers in this election—whatever the electoral outcome. And then they need to demonstrate their inclusive approach once in power, the Chatham House Associate Fellow stated.
“But past experience elsewhere shows us that politics often become either more kleptocratic with oil wealth (with elites capturing what they can) or more competitive (with political groups vying for their turn to do so). Strong institutions and a society that demands more of its politicians can help counter this. It should be said, the last APNU government did not capture wealth for its own benefit,” Dr. Marcel said, while adding that the real test for Guyana is what happens now.
University of Houston Instructor, Tom Mitro, sought to preface his contribution to the debate by first noting that he has no authority on Guyana’s history or its politics. That said, he noted for those unfamiliar with the term that the oil curse has several components.
Mitro who has more than 40 years in the industry said that one aspect of the oil curse on which most analysts agree is that virtually overnight, the power and influence of the central government and the individuals in office increases exponentially, almost exclusively to the Executive branch. This he said is all with the aim of ensuring they can influence and control access to oil funds.
The University of Houston Instructor said, “The main reason for the centralisation of power is due to the revenues generated from oil, i.e. royalties, taxes, and production sharing, all going to the account of central government who owns the mineral rights. It is the concentration of funds at the central level that often leads to attempts to obtain greater power over how these funds are distributed…”

Mitro said that many young democracies, especially those that have experienced ethnic or regional divisions in the past, may not have established sufficient judiciary and legislative branch checks and balances or press freedoms to be able to offset or mitigate that enhanced Executive power that has resulted from the discovery of oil.
The University of Houston Instructor asserted that there have been many examples in petroleum dependent countries (Angola, Nigeria, Congo, Venezuela, Equatorial Guinea and many Middle East states) where this has happened.   In those cases, he noted that unchecked and enhanced Executive power caused by incoming oil revenues led to excesses, such as corruption or human rights violations.
Mitro noted, “And this endeavour to obtain or retain executive power has led in many cases to attempts to influence or rig elections, wasteful spending on projects in their home districts, dividing the political opposition by playing on regional or ethnic differences, or, in extreme cases, civil wars or coups d’état .”
Upon providing this preliminary explanation of some of the characteristics of the oil curse, the University of Houston Instructor said, “I certainly hope this phenomenon has not taken hold (of Guyana).”
To be continue…