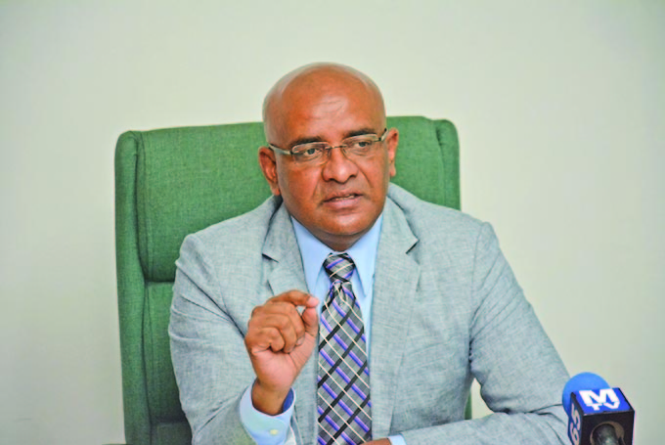 It is almost one year now since the Guyana Police Force (GPF) is probing a damning report on corruption that took place at one of its sister agencies, the Special Organized Crime Unit (SOCU), from 2016 to 2019. Not a single person has been hauled before the courts to face the music, since.

Should the People’s Progressive Party (PPP) win the upcoming General and Regional Elections, its General Secretary, Bharrat Jagdeo, vows that there would be no pussyfooting on such issues. In fact, he told Kaieteur News and other media operatives that it would ensure action is taken to break the back of corruption in SOCU and even the Guyana Police Force.
Speaking at a press conference, yesterday, at his Church Street headquarters, Jagdeo said that the government has simply dropped the ball on these matters. He said that he is in the dark just as much as the media fraternity is on the reasons behind no one being charged for corruption that took place at SOCU.

The Opposition Leader added, “These guys don’t give (an) explanation about anything. When they are caught with fingers in the cookie jar, they blame someone else…We definitely have to look at these issues…We will put in place, a body that will go after the real corruption, not just at SOCU and the Police Force (but wherever it is).”
Highlighting the importance of having external investigators, Jagdeo disclosed that he has seen attempts to cover up corruption at some senior levels within the police force. As a result, he said, junior ranks would not be inclined to carry out investigations as they would fear victimisation from their superiors. For this reason, he stressed that the Police Force cannot be relied upon to root out corruption within its domain.
SOCU CORRUPTION

This newspaper would have exposed over the last few days, some instances of the shocking levels of corruption that took place from top to bottom at SOCU.
The document which was seen by this newspaper stated that the former Head of the Unit, Sydney James, and several other officials such as Superintendents Robert Tyndall, Trevor Reid, Byran Vieira and Corporal Kevin Haywood from the Guyana Defence Force, abused the agency’s Operational Fund which benefitted from $1.5M on a monthly basis.
With the exception of a payment book, the audit found that there is no record to rely on for a transparent and accountable financial process at SOCU. In fact, auditors said there is no remittance book, daily cash composition book, and no account and expenditure books.
As it relates to some of the allegations of fraud and corruption, auditors observed that in June 2016, Reid, Tyndall and Vieira collected $600,000.00 each.

But in a scramble to prove that they could account for it, they produced several receipts from January to June to show that they spent $100,000 a month on intelligence gathering. But these receipts were found to be back dated.
It was further observed by the auditors that Haywood, who served as the secretary and not as an investigator, did no operational duties during the time of the assessment, but he still received a whopping $1,378,000. As for the entity’s former Head, there are allegations against him that he forged the signature of his successor, Superintendent Althea Padmore, so that he could obtain almost $1.8M.

Auditors also learnt that James claimed to have paid $1,719,000 on five occasions to repair motor vehicle PRR 2609. It was discovered that this was not a police vehicle. In addition, the store he claimed to have made the payments to, A and F Auto repairs cannot be located.
Another disturbing discovery for the auditors were records which showed that the SOCU official paid $10,300,000 to M. Ali for car rental. All the receipts were vague and had no vehicle registration numbers or the period they were rented for.
Also, the receipts had no letterhead or official stamps. The auditors were alarmed at the fact that the amount paid to Ali is 43.6% of SOCU’s expenditure for the audit period (2016 to 2019).

Kaieteur News understands that evidence for all the instances of corruption identified by the Audit Department has been handed over to the police for further investigation by the Fraud Squad.