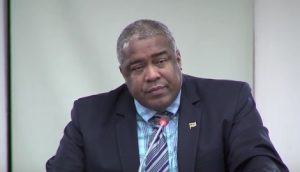 Former Surinamese Finance Minister, Gillmore Hoefdraad, who is wanted for questioning in his home country, has reportedly been spotted in Berbice.

According to persons who know Gillmore Hoefdraad, he was seen in the company of a number of well-dressed men, in the Corentyne area.
“These men came to buy liquor. It was obvious that they were foreigners from the way they were dressed. They were also speaking Dutch. They buy some things to drink and went across the road,” a businessman from Berbice said yesterday.

It was explained that many Berbicians, who have families and do business with Suriname, would stream news from there. “So we know the minister. We see his face. It was him and some well-dressed people.”
The men have not been seen for a few days now since the story was first reported in Kaieteur News on Tuesday.
Suriname authorities had suspected he fled here.

It was unclear whether Surinamese authorities have asked their counterparts in Guyana for help. What is known, is that attempts to solicit a comment from Minister of Public Security, Khemraj Ramjattan, have proven futile.
Authorities, if they find the former minister in Guyana, will be highly interested as to how he came here.
The country’s borders have been closed with Surinamese security forces patrolling the Corentyne River which separates it from Guyana.
Persons who have attempted to cross would be breaking COVID-19 regulations.

The former Finance Minister is wanted for questioning into alleged irregularities at that country’s Central Bank.
This week, there were reports from Suriname that Hoefsdraad’s lawyer has written to the country’s National Assembly requesting that the matter not be brought again unless there are new developments in the case.
Hoefdraad is the Finance Minister under the recently ousted government of Desi Bouterse.

According to Suriname’s daily newspaper, De Ware Tijd, Hoefdraad has been identified as a suspect in the criminal investigation into malpractices allegedly committed at the Central Bank of Suriname (CBS) by the then governor Robert van Trikt. The Public Prosecution Service wants to hear from the former minister in the ongoing investigation.
At the beginning of this week, the Attorney General, Roy Baidjnath-Panday, sent a motion to Parliament for Hoefdraad to be charged. An earlier attempt in May was struck down when the then coalition, led by Bouterse, voted against granting the claim. Hoefdraad has reportedly been informed by Parliament that a renewed action has been filed against him.

De Ware Tijd reported Monday that bailiffs were unable to serve the former minister summons since he was not found at his address.
Guyana’s border with Suriname has been problematic when it comes to monitoring illegal crossing, whether movement of persons or illicit trade. There have been reported cases of breaches even as Guyana has closed its borders for four months now as part of the national measures to reduce the spread of COVID-19.
Meanwhile, Suriname’s new reports said yesterday that its National Assembly (NA) decided on Tuesday to appoint a special committee.

According to coalition faction leader, Asiskumar Gajadien, the appointment of this committee has everything to do with the renewed request by the Attorney General to charge the former Finance Minister.
The first meeting is set for today. It will be determined if the matter is to be heard again.
It does not matter if Hoefdraad has fled.

According to Gajadien: “I don’t want to anticipate matters, but if Hoefdraad does not show up, parliament will make a decision about it,” emphasized the coalition group leader.
In the meantime, Hoefdraad’s lawyers, Murwin Dubois and Frank Truideman, have asked the National Assembly, in an urgent letter, not to consider the renewed request.
They believe that the same issue cannot be addressed twice.