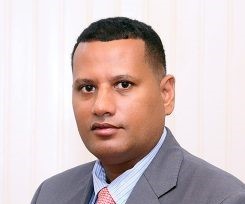 Several houselots allocated by the Central Housing and Planning Authority (CH&PA) this year have been placed under review.

Among them is the allocation of houselots to former Prime Minister, Moses Nagamootoo, former Minister of Public Service, Tabitha Sarrabo-Halley and others.
It would raise eyebrows because under CH&PA rules, one cannot benefit from houselots if that person already owns a property.
Newly appointed Minister of Housing and Water, Collin Croal, told Kaieteur Radio’s ‘Room 592’ hosts, Dr. Yog Mahadeo, and Kaieteur News Senior Journalist/Editor, Leonard Gildarie, on Friday, that the two former senior government officials are listed among the persons who applied for their houselots in June and received their approved allocations the following month.

Croal noted that their applications would have superseded over 68,000 requests by Guyanese who applied for lands but have been placed on the waiting list for years now.As such, the Minister noted that a decision was taken to review the questionable transactions.

According to Croal, since his assumption of the Ministerial post earlier this month, he was able to critically assess and examine the system for the allocation of houselots.
He noted that a number of issues within the CH&PA were brought to his attention.
“The system is clearly overwhelmed with requests yet we are finding that some applications that were given priority are new in comparison to others and there are some persons who never got houselots,” Croal explained.
He continued that as recent as August 1, 2020, some of these questionable allocations were made.
“What we found interesting is that the houselots were given out on August 1, 2020 which we all know is a national holiday—a day before the new government was sworn in,” Croal said.
He noted, too, that several persons who allocated lands for housing could not be located.

“We need to find these persons and determine how it is that they received their allocations…it was part of a former government’s move to get votes with the promise of a houselot,” Croal added.
As such, the Minister said a decision was taken to place all issuance and allocation of houselots on hold, “until we can determine who was given what and on what basis.”
Additionally, Minister debunked claims that the review is part of ploy by the new government to take back the lands.
“We are reviewing the system to ensure what has been happening was a fair and transparent issuance of lots. That‘s all we are going through the process now for.”
Further, the Minister said that policies are being developed to ensure that priority is given to the category of people based on the set guidelines and criteria.
Earlier this month, Minister within the Ministry of Housing and Water, Susan Rodrigues, noted that the new administration is tackling the immense backlog of houselot applications at the CH&PA.
She noted the lack of a comprehensive housing policy, by the APNU+AFC Coalition administration, is one of the reasons for the accumulation.
The alarming figure, Rodrigues said, represents applicants spanning several years, many of which in some cases, have not been allotted houselots due to unavailability of developed land in their preferred area.