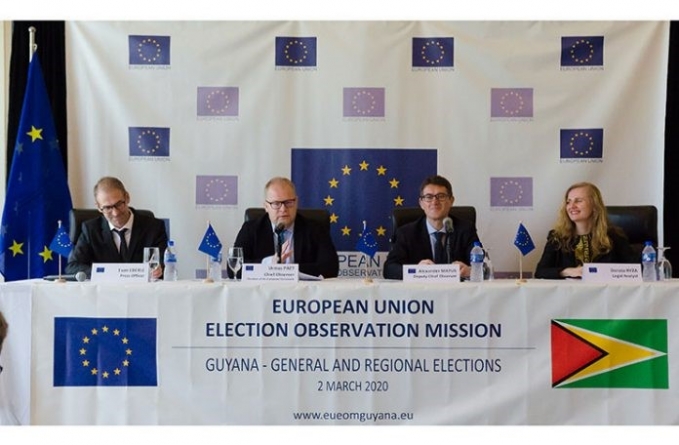 Both major political players in Guyana A Partnership for National Unity/ Alliance For Change (APNU/AFC) and the People’s Progressive Party Civic (PPP/C) have over the years continued to point fingers at each other when it comes to the abuse of state resources for campaigning with none willing to accept blame.

They used the advantage of “incumbency to appeal to voters through development programmes.”
Paet reported that the EU observers saw governmental donations provided in the context of APNU+AFC campaign events particularly in the Region Nine area.

The opposition PPP however, he noted, was observed using state resources at a regional level.
Further, Paet pointed out that both parties are known for their “in-kind vote buying” in many indigenous communities.
Guyana’s Biased Media

The political parties were not the only ones on the ‘hot seat’ as Guyana National Broadcasting Authority was also called out for its inability to effectively monitor the media during the intense campaign season.
The EU head explained that the media was able to freely cover the campaigns.

However, while the law stipulates that broadcasters provide a fair and balanced coverage of national politics, the broadcasting authority did not conduct thorough monitoring to ensure that this was so.
Guyana’s media environment was described as “highly politicised”, with very few independent media and the majority of media outlets being either directly affiliated or leaning to one of the two main political camps.

It was highlighted that both state broadcast and state print media, which benefit from the widest reach in the country, showed open bias to the government and ruling coalition.
Previously, Kaieteur News had pointed out that for this campaign season, the National Communications Network (NCN); the Department of Public Information (DPI) and the Guyana Chronicle showed open biased to the ruling coalition and the same was highlighted by the EU EOM.

According to its report, “the state-owned TV Channel 11 devoted a total of 60 percent of its news coverage to the government and the president, and 25 per cent to APNU+AFC.”
“In addition, clearly misusing state resources, the Department of Public Information (DPI), a governmental agency, was extensively used to promote the ruling coalition’s campaign activities.”

Further, the EU EOM outlined that Private broadcasters also showed a bias in their coverage of the election campaign.
Namely, Channel 28 and the PPP/C affiliated TV Channel 65 devoted to this party 58 percent and 77 percent of their news coverage, respectively.

The report stated that by contrast, Channel 9 devoted a total of 57 percent of its news to the president and the government as well as 23 percent to APNU+AFC.
The state-owned newspaper, Guyana Chronicle, provided extensive news coverage of the incumbent president, government and ruling coalition, offering considerable space to letters from readers critical towards PPP/C.
Conversely, Guyana Times offered wide and positive coverage of PPP/C and substantial negative coverage of the government and ruling coalition.

Kaieteur News and the Stabroek News were the only two media entities singled out as proven to be rather balanced in their news coverage.