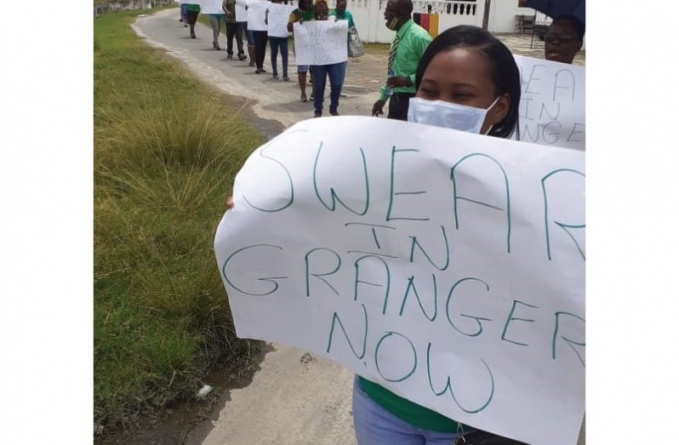 THE rain did not stop supporters of the APNU+AFC coalition from protesting for President David Granger to be sworn in as Guyana’s next President.
Their protest came on the grounds that the March 2 Elections have concluded and from all indications, based on the Gecom Chief Elections Officer (CEO) Keith Lowenfield, the coalition has won.

Organiser of the protest was Chairman of the PNC in Region Two, Prince Holder. He said the peaceful protest was to call on GECOM to declare the result of the elections and to pave the way for President David Granger to be sworn in. During their protest the supporters of the coalition walked around the Town of Anna Regina for approximately three hours.

The protestors were holding placards that read, “Swear in President David Granger”, “We want Granger for President’, “Only Granger can run this Country”, “Swear Him in Now”. According to a young protester, the country is in chaos, and a decision needs to be made soonest so that Guyana can have a President.