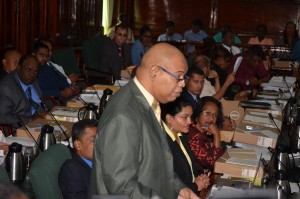 I refer to an article in Stabroek News on Saturday 18th January, titled ‘ERC cites Harmon, Edghill for alleged racist remarks on campaign trail’. As a citizen of Guyana and a candidate to the poll on the PPP/C list for the March 2nd General and Regional Elections, I wish to state the following:

What has happened to the principles of natural justice? An announcement to the public that a party is under investigation when there has been no notification is tantamount to an attack on that party and an attempt to impugn character. I therefore expect a full unequivocal apology from the ERC and a retraction of the statements made forthwith.

Once the feathers of a fowl have been plucked and blown asunder by the wind even if it is gathered cannot be reunited usefully with the fowl. I am not viewing this as a misstep or a mistake; this is more than likely a calculated move. Such behaviour must not be allowed to continue unchecked.