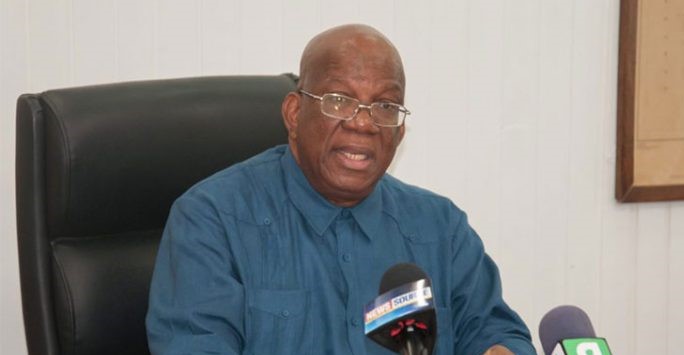 CONTRARY to the message of the Opposition, it is not in the government’s or the country’s best interest for the prolonging of current electoral stalemate as the longer Guyana remains without a budget the worse an effect it will have on the economy.

In an interview with NCN on Thursday, Minister of Finance, Winston Jordan said that with no budget in place, only ‘roll-over’ projects and foreign finance projects were being conducted by the government.

The Finance Minister made it clear that, although Guyana’s economy will suffer as it awaits the conclusion of the electoral process, no new projects were being pursued in the government’s interim state.

He explained: “The longer we take to bring a budget is the harder for the government expenditure that helps to stimulate the economy to get in. If we continue to be restricted only to foreign finance projects and roll-over projects, the economy will be starved of new financing in respect of new projects.”

Minister Jordan said that as soon as a new government comes in place and Parliament is called, a Budget and Appropriation Bill can come three months after. However, he highlighted that this still pushes the country into almost a year without a budget.
“We really have to get this problem solved quickly,” he stressed. “Economic activity, which would have slowed as a result of not having a budget, will be slowed further as a result of COVID.”

One of the projects which were on-going without a budget was the US$31M Inter-American Development Bank (IDB)-funded Sheriff Street/Mandela Avenue road expansion project.
Jordan said that while some citizens have looked at what countries like Jamaica were doing to fight COVID-19 — those having pledged billions to the cause — persons must realise that those countries are currently facing very different realities from Guyana.

“Barbados, Trinidad and Jamaica don’t have our problems. They are not in the state that we are in at the moment. We are limited in terms of what we can do for COVID and without COVID we would have been extremely limited as to what we can do while we wait for a government to get in place,” he said.

The year 2019 marked the country’s biggest budget to date standing at $300.7B. The year 2020 was expected to have an even larger budget as the country stepped into ‘first oil’ and had plans for several major developmental projects.