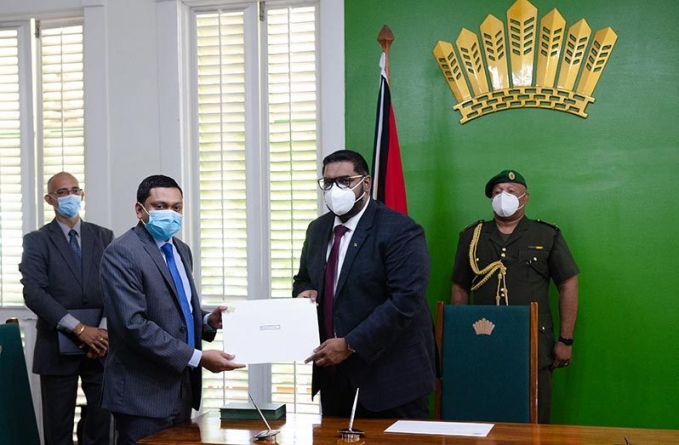 ALL involved in the undermining and derailing of the March 2 general and regional elections will be held accountable, newly-appointed commissioner to the Guyana Elections Commission (GECOM), Manoj Narayan said.

Attorney-at-Law, Narayan, has replaced Robeson Horatio Brindley Benn, who resigned after his appointment as minister of home affairs.
After he was sworn in by President Irfaan Ali at State House on Thursday, the lawyer stressed, “We can’t tell them go forward and rig no more, they must be held accountable.”

He said his appointment is not one in which there is a celebratory moment or occasion because of the state in which GECOM finds itself.
“As we would have all witnessed from the 2nd of March to the 2nd of August, 2020, we have witnessed a most heinous assault upon our electoral democracy in this country and therefore my work begins immediately, because we have to do a number of things at GECOM,” he said.
He continued: “The very survival of our electoral democracy requires that we solve those problems. I think the first one is those who have undermined that electoral process must be held responsible; they all took oaths of offices under the Representation of the People’s Act and they blatantly and flagrantly breached that oath which they took.”

He said that such actions are not trivial or trifling and cannot be swept under a carpet. No one, he said, will be given a slap on the wrist or any form of forgiveness.

“We can’t tell them go forward and rig no more, they must be held accountable, and the second thing we need to do is to create and implement policies at the level of the commission to insulate the commission for these occurrences in the future,” he said.
Thirdly, the lawyer noted that the public trust and confidence in GECOM must be rebuilt locally and internationally.
He explained that the commission has wide powers under article 161 (a) of the Constitution – the commission is empowered to institute disciplinary proceedings against officers of GECOM.

President Irfaan Ali said the appointment happened at a critical time when many issues have to be dealt with that are of public and national interests.
The head of state said Narayan is a young lawyer who has already spent a lot of time on electoral matters.
“In my inauguration address, I spoke of the need to have a comprehensive understanding as to what took place over the last five months, especially after elections. I want to publicly acknowledge the great and extraordinary work that GECOM Chair, Claudette Singh, did and continues to do… Madam chair has led by example, you have acted selflessly and Guyana, I hope at some point will reflect, and in the right manner celebrate the work you have done,” President Ali said.

He said with Narayan’s appointment, GECOM can now continue its work in relation to the recently concluded elections.
President Ali said that the electoral system must be strengthened since the people of the country can express confidence in the decisions being made as Guyana needs strong democratic institutions that will always be respected.

In addition, Attorney-General and Minister of Legal Affairs, Anil Nandlall said the government is pleased about the appointments since there was a hiatus in the constitutional functions of those organisations.

“We are committed to constitutional governance and ensuring that the Government operates in compliance with the Constitution and the rule of law. We had this vacancy at GECOM that we had to fill. As you know, there are ongoing investigations at GECOM and to facilitate those investigations, it is imperative that GECOM is fully constituted so that decisions can be made reflective of the full Commission,” he said.
Also in attendance was GECOM Chair (rtd) Justice Claudette Singh.