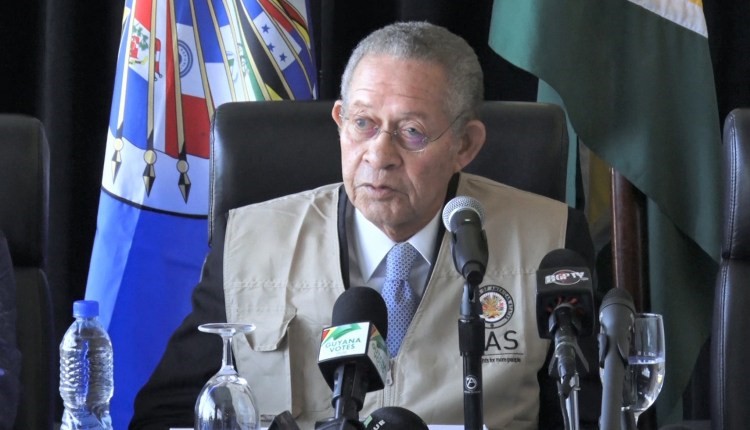 The electoral observation mission of the Organization of American States (OAS) on Tuesday urged the Guyana Elections Commission (GECOM) to consider implementing a more modern tabulation system for the allocation of votes.

The recommendation, though not new, forms part of the OAS preliminary report of the March 02nd, 2020 general and regional elections.

The recommendation, which formed part of the OAS recommendations at the 2015 elections, comes at a time when Guyanese are being urged to exercise patience by the electoral body and political parties in the face of limited verified preliminary elections results.

Chief of Mission, Bruce Golding presented the mission’s preliminary report to the media, other observer groups and members of the diplomatic corps.

He acknowledged the geographical challenges which affect the speedy tabulation of votes and early declaration of the results.

To this end, he said there is need for the development of technology solution which would see the transfer of statements of polls from regions to a central server through the establishment of central computerized results receiving system.

“I recommend that the elections commission consider implementing a system to give preliminary results and make information available on elections day or the morning after,” Golding said.

A final more detailed report will be prepared and disseminated at a later time.

The mission commended the people of Guyana on their strong democratic commitment reflected in the peaceful and enthusiastic participation at the polls.

Guyanese are also being applauded for their patience in awaiting the results of the poll and encouraged continuation.

The Mission says it looks forward to the publication of the results by GECOM at the earliest opportunity.