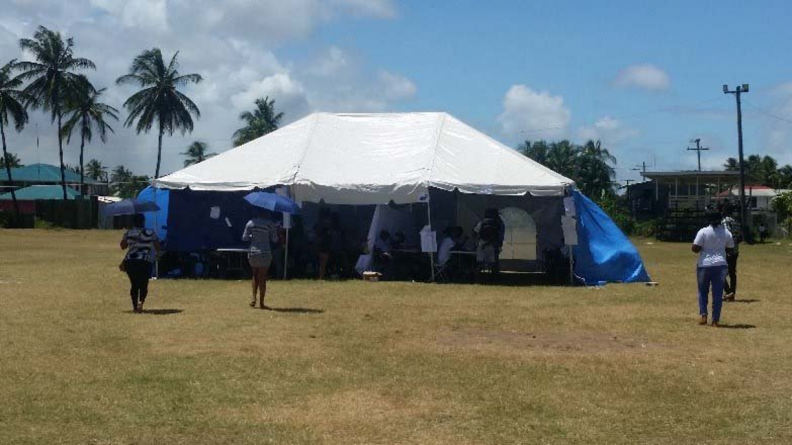 Following a day of high emotion and smooth voting, Guyanese are anxiously awaiting the results of the 2020 General and Regional Elections (GRE) and based on a small number of polling statements collected by this newspaper it was a straight fight between the incumbent APNU+AFC and the opposition PPP/C with a smattering of votes for some of the new parties. (See pages 12 and 13)

While Chief Election Officer, Keith Lowenfield would not provide a definitive date for the declaration of results, he told a press conference last evening that he is hoping that the ten Returning Officers (RO) will be able to make a declaration of the results in their respective districts by lunch time today.

A total of 660,998 registered electors were expected to cast their ballots at 2339 polling stations in what analyst have said is Guyana’s most important elections ever.

The day itself began with a promise to be perhaps the efficient and peaceful election this country has ever seen but by close of polls hostilities had erupted at areas in Regions 3 and 4 with riot police being called in to quell unrest at Mon Repos on the East Coast of Demerara.

In Region 3 tensions simmered over claims that persons were distributing fake Identification Cards with coalition supporters blocking the roads and turning away the PPP/C presidential candidate Irfaan Ali.

“They are in full panic…it is a desperate attempt…to mobilise their supporters,” General Secretary of the People’s Progressive Party/Civic, Bharrat Jagdeo said of the incumbent while blaming them for the unrest.

According to Jagdeo, once the coalition saw a strong turnout in PPP strongholds and low turnouts in many areas in Georgetown, it began reacting in a predictable manner by making wild accusations.

“Why would we want to distribute ID cards openly to people on Election Day in front of the entire media and everyone else?” he asked while stressing that a fake ID card would be impossible to use given GECOM’s checks and balances.

The incumbent APNU+AFC in turn accused Jagdeo of making a false and mischievous statement.

According to a statement from the party it was expected that “the PPP would engage in this type of fake news and fearmongering to set the stage for excuses for their certain political defeat.”

According to the President his observation during the process was that voting proceeded in a peaceful manner during most of the day.

“We received no reports of any interference in the normal electoral process except for some incidents were have reported to GECOM,” he said before explaining that one such incident was preventing persons from voting because they were wearing colours associated with political parties.

As the two major parties traded barbs via statement their supporters faced off on a narrow village street with a line of riot police separating them.

The entire atmosphere bristled with malevolent tension distinctly different from the exuberant joy which marked the beginning of the day.

For many communities E-Day began before the sun rose as scores of their neighbours used drums, bells and horns to let them know it was time to Get Up and Vote.

In Buxton, the village criers took to the streets at 3:30 AM, a full two and a half hours before polls opened at 6 am.

“Wake up. Wake Up. Buxton people y’all wake up,” they chanted as they moved from street to street. Those who heeded their call found themselves at their place of poll as early as 4:30 am.

“When we arrived to set up the entire street was filled with people. The line extended its entire length,” one Presiding Officer at the Buxton Practical Instruction Centre (PIC) told Stabroek News.

At Company Road Primary, also in Buxton, a similar line had formed. At 6 am when the doors of the polling stations opened it began to rain in the village but this did not deter those already in line.

“It’s just a lil blessings…bare up and push through,” one villager advised.

They did and by lunchtime more than half of the 927 electors registered to vote at the two polling stations in the compound had cast a ballot.

At the PIC the percentage was a lot closer to 80% according to one Presiding Officer.

Everyone was in good spirits. Inked fingers decorated Facebook timelines like badges of honour and no inconvenience was too great to overcome.

In the vicinity of the Annandale Secondary School, this newspaper interacted with one of the information booths which had been set up by the PPP/C to assist persons in finding their polling station and was told of those who had to travel great distances to cast a ballot.

One woman who had transferred her registration to Buxton was somehow still registered at the St Mary’s Primary School at Soesdyke, East Bank Demerara. Another man had to travel all the way from Linden to cast his vote in Buxton even though his change of address had been approved by the commission.

After verifying these claims, Stabroek News reached out to GECOM PRO Yolanda Ward who explained that the commission was prepared to transport the affected persons.

‘I’m not sure what happened there but I saw one other case and we have transported that individual,” she noted adding that it is unlikely this situation affected a significant number of persons since the commission has only received the one complaint.

Lowenfield later said it was a handful clarifying that 25 as a subset of the 600,000 registered would constitute a handful.

He too noted that those persons were transported to their place of poll once they identified the issue to GECOM staff.

Meanwhile the persons travelling long distance to vote appeared unconcerned about the inconvenience.

At Mon Repos similar inconveniences were brushed off. One voter told Stabroek News of being directed to the wrong polling station and standing in the sun for nearly an hour with his young child only to have to join the correct line, this time at the Mon Repos Market Tarmac.

“We’re all human. We make mistakes,” he said of the hapless clerk who misdirected him.

Further up the coast one eager young beaver was disappointed when he learned that his January 5 birthday made him five days too young to vote.

A new feature of this year’s elections was Tents which the commission decided to use in lieu of private residences.

Along the East Coast corridor playfields and vacant lots became polling places with either individual tents as polling stations.

The unconventional set up seemed not to impact the efficiency of the process or make voters uncomfortable in anyway.