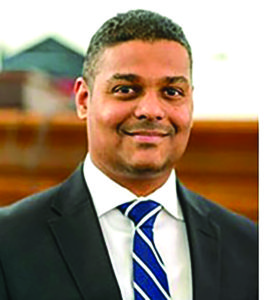 The smaller political parties that contested the March 2, 2020 elections held a united front during Saturday’s proceedings in the appeal case Misenga Jones v the Guyana Elections Commission (GECOM) et al, and submitted that the issues raised are best dealt with via an election petition before a duly constituted election court.

Attorney for The Citizenship Initiative (TCI) and Change Guyana, Kashir Khan submitted that the issues raised in Jones’ appeal are at best a “thinly guised” attempt to relitigate issues that have already been determined in a competent court. He added that the act of attempting to relitigate is tantamount to an abuse of the court’s process with the sole objective being stymieing and delaying the consequences of the court’s ruling.
It was on those grounds that Khan, on behalf of his clients Shazam Ally and Abedin Kindy Ali, sought to have the Jones appeal dismissed.

Jones is seeking to have the July 20 ruling of acting Chief Justice Roxane George overturned by the Appeal Court on the grounds that the CJ erred in law when she dismissed the application for judicial review. The CJ had ruled that the issues raised in Jones’ application – which, among others, sought to have the court order GECOM to utilise the declarations of the 10 Returning Officers as the basis for the declaration of the results of the March 2 polls – were res judicata.

She had expressly stated that Chief Elections Officer (CEO) Keith Lowenfield is subservient to the Elections Commission and cannot act as he deems fit in addition to ordering that the results emanating from the National Recount be used as a basis for the declaration of the results.

Not satisfied with her defeat in the High Court, Jones approached the Appeal Court for relief. She based her appeal on the grounds of whether Section 22 of the Elections Laws (Amendment) Act, No 15 of 2000 pursuant to which GECOM issued Order 60 of 2020 is Constitutional; whether Order 60 and by extension the recount results obtained therefrom are valid such as to permit a declaration of the March 2, 2020 election results based on the said recount results; whether the declarations of the Returning Officers for the 10 Electoral Districts made pursuant to Section 84 of the Representation of the People Act, Chapter 1:03 should be acted on or be set aside; and whether Section 18 of the Election Laws (Amendment) Act of 2000 is unconstitutional in light of Article 177 (2) (b) of the Constitution.

On the issue of Section 22 of the Elections Law Amendment Act, attorney Khan told the court that the issue has already been frontally dealt with in the case of Ulita Moore as well as many of the others raised by Jones. He also noted that the “impasse” that exists between the CEO and Commission is one that the court is duty-bound to make specific orders as was the case when CJ George ordered the recount results be used.

“We are in uncharted territory (with this series of litigations) and more often than not it is the resort to the basic principles that obtain from the common law which ultimately will guide the court. I believe that the Chief Justice, while she may not have said that, is essentially relying on basic common law doctrine to say that as a court of superior record we are entitled or duty-bound to say this is how this is interpreted, this is how it should be understood, this is how it should be applied,” Khan forwarded.

He explained that Order 60 of 2020 (the Recount Order), as per the ruling of the Caribbean Court of Justice (CCJ) in the case of Irfaan Ali et al v Eslyn David et al sought to fill a gap.
“Order 60 has a presumption of legality. Before you decide to throw out Order 60 you have to see and decide whether Order 60 can be interpreted in such a way that it is not inconsistent with either the Representation of the People Act or the respective constitutional provisions. The CCJ did exactly that and it came up with a formulation which said that Order 60 must be viewed as filling the gap,” he noted.
He argued that when one ally Order 60 with the powers set out in the Constitution then it gives GECOM the authority to conduct the recount.

Election petition
Meanwhile, counsels for A New and United Guyana (ANUG) – Kamal Ramkarran, Liberty & Justice Party (LJP) – Hari Ramkarran, The New Movement (TNM) – Timothy Jonas, and United Republican Party (URP) – Sanjeev Datadin all argued that if one wants to frontally examine the issues in Jones’ application then it should be done by way of an election petition.

Kamal Ramkarran forwarded that the time has come for the Court of Appeal to set clear parameters on a principled basis for the exercise of its special jurisdiction to hear election matters outside of a petition. He furthered that the court should fashion its ruling to uphold the principles of Section 141 of the Representation of the People Act which clearly prohibits any court from inquiring into the functions of the Commission. Additionally, he urged the court to uphold the election petition regime recreated by the Constitution and National Assembly Validity of Elections Act but leave very narrow and limited jurisdiction to the courts to scrutinise where laws may not be complied with.

Democracy on its knees
Datadin, in furtherance of his contentions on behalf of the URP, said that Guyana’s democracy is on its knees and that finality should be brought to the elections process. He reminded that outside of an elections court, no other court can enquire into the operations of GECOM and as such the court should throw out the appeal.

Jonas called out Jones’ application for its similarities to that of Ulita Moore’s and Eslyn David’s which were also brought by the same legal team. He said that an impasse cannot exist at GECOM for the basic principle that GECOM is Lowenfield’s employer and that he is bounded by their instructions. The attorney insinuated that if Lowenfield fails to deliver then the logical step of replacing him must take its course.