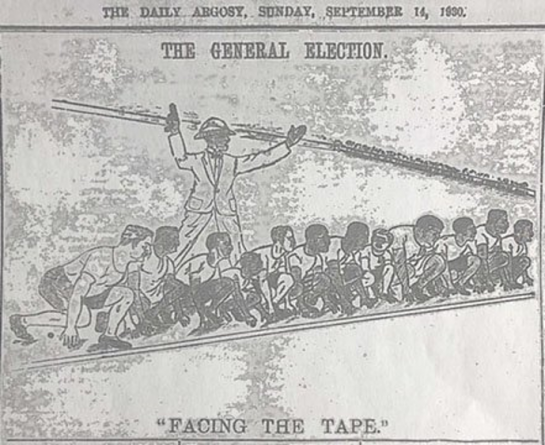 “The issue of the General Election is a matter of some uncertainty. Since the last election five years ago the voters’ rolls have swollen considerably, in some cases the electorate being as much as three times greater than on the last occasion. How many of the new voters, or even the old ones, will have sufficient intelligence and commonsense to vote for the best candidate, or in their own best interests, is largely a matter of speculation, but it is sufficiently obvious, from the caliber of the candidates who have offered themselves, that the next Combined Court is going to be very little of an improvement on the Court whose term has expired”When was this extract written? In 1926! It was taken from an editorial in the Daily Argosy in October 1926, commenting on the General Elections held under restricted franchise that year.

What does this citation from the 1926 general elections under restricted franchise have to do with its 2020 counterpart? Everything. The extract’s cynical tone is a metaphor for elections in Guyana. Elections in 1930 and 1935 were to follow. There was a gap between 1935 to 1947, a delay caused, as Guyanese historian Kimani Nehusi puts it, by  “the Second Great War of that century…” and the fact that “the British were using that conflict as an excuse to further delay the democratic process.” The 1947 general election was significant for the modern period in that it featured some of the leaders who would proceed to dominate Guyanese politics for decades.

Elections have been a huge burden on Guyana, not because they are not democratically necessary but because for reasons like race, social class, gender, social violence and the muse of history, it has haunted us for more than a hundred years. And throughout these hundred years plus, like a recurring addict, Guyanese continue to latch ourselves onto these episodic incantations of misery. Misery, because the one recurring image that stands out is “race”. Guyana, has held elections (rigged or unrigged) for every four or five years since the landmark elections of 1953. Yesterday, as we were at the polls for the fourteenth time since 1953, I thought it would be useful to reflect briefly on some of these elections, beginning in 1947.

In 1947, elections (still under restricted franchise) were held in 14 electoral seats for the same number of districts and 48 candidates contested the 14 seats available. A relaxation on income qualification for voting had raised the electoral list to nearly 60,000 voters.  The Labour Party, formed that same year, and a main contender, included personalities like Hubert Critchlow and Frank Jacob. Cheddi Jagan and his wife Janet contested the 1947 elections as independents. In brief, Janet Jagan lost to John Fernandes in Central Georgetown; Hubert Critchlow lost in South Georgetown; while Cheddi Jagan (1,592) won a narrow victory over John D’Aguiar (1,299) in Central Demerara. It was from the basis of this victory that Dr Jagan first entered the Legislative Council.

One of the most significant elections in Guyana’s history, in 1953, is well reported on and sticks out like a sore thumb as the “beginning” of the modern political movement. In this first election held under universal adult suffrage, the percentage turn-out at the vote was 74.8%. The main contestant (in terms of outcome)  as we know was the PPP (People’s Progressive Party) with its merry band, two of whom, Burnham and Jagan, would dwarf the national stage (and the tragedy I might add, of Guyanese politics). There were other long forgotten political entrants  in the election of 1953:  the NDP (National Democratic Party) was led by John Carter; the United Farmers’ & Workers Party, led by Daniel Debidin; and the GNP (Guyana National Party), led by Dr Loris Sharples. The United Farmers and Workers Party eventually dropped out of the race.  Of the 24 contested seats the PPP won 18, NDP 2 and Independents 4.

The next election was in 1957, after the suspension of the constitution and a period of British terror and manipulation.  By then the PPP was riven into two camps, PPP (Jaganite) and PPP (Burnhamite), the harbinger of explicit racial voting. Voter turnout was low at 55.79% with 118,564 persons out of a possible total electorate of 212, 518. The PPP (Jagan) won 9 seats or 47.50% of the votes; the  PPP (Burnham) won three seats or 25.48% of the vote. The NLF (National Labour Front) secured 1 seat and the UDP (United Democratic Party) won 1 seat

The election held yesterday is arguably one of the most consequential in the history of Guyana since 1953, because “oil” will now be inherited by the winner. Yet what has Guyana accomplished in the years of elections, rigged and unrigged? One single determinant since 1953 has been central – race. Now after years of  crippling emigration and continuous decline in the social and moral fabric of the society, horrific violence against women, terrible road carnage, the continuing loss of standards in education, rural urban divide, poverty, blackouts, and a reflex toward authoritarianism, we might ask, what will happen after 2020?

In a new collection, Unmasking the State: Politics, Society and Economy in Guyana 1992-2015 (edited by Arif Bulkan and Alissa Trotz), Percy Hintzen puts the dilemma we face as a nation-state  succinctly:

“the issue of legitimacy in Guyana rests with effective representation of the competing communal groupings in the process of decision making about resource allocation. The more politicized or exclusive this process is, the more intense the demands for communal representation. The consequences have been devastating. The dependence upon international intervention by racialised political parties has intensified the penetration of global capital and has eviscerated any semblance of sovereignty.”

It is the last section of this quote I want to address. None of the political parties in Guyana, it would seem, has developed an independent and critical response to the marauding ExxonMobil and other foreign economic interests. What will the Guyana state look like in five years? In ten years? None of the political parties, it appears, will stand up with any nationalist vigilance and conviction against the forces described by Hintzen. The Organisation of the Victory of the People (led by Gerald Pereira) is the only small group (apart from a few individuals) who have held a consistent radical position that addresses itself to the reality of what I can only describe as this new imperial conquest.

Others have joined Pereira in bold critiques of the existing and past orders.  David Hinds and Freddie Kissoon, in different ways, lament the condition of the poor without directly calling for an alternative social and political system. In Kissoon’s case he critiques the everyday condition or dystopia in Guyana, the lack of energy, the fear and the everyday absence of common sense in every sphere of social life. He calls Guyana a “cruel, uncaring, indifferent society” or one that is consistently “failing poor people.”

This new neo-liberal onslaught in which market and foreign capital are central drivers, comes with sophisticated public relations, bribes and sophisticated legal power. The WPA has published its popular cash transfer proposal, which both major parties, the PNC and PPP have now latched onto with some reluctance. However even the WPA, unlike its muscular radicalism of past, has not kept up a holistic ideological defence of the nation’s assets. Instead, it too has apparently succumbed to a mostly conservative overall position in the APNU+AFC alliance. But even with a checkered record over the last four years plus, I would contend that the APNU+AFC has presided over far less corruption than its predecessor.

In like vein there are very few critiques of the global class system than as witnessed in the past. We are in essence, in an age of passivism with the ravages of global capitalism hidden under the haze and glaze of new technology and the “normalization” of the power of big corporations. Small countries like Guyana are up against international corporations with effective strategic power and PR techniques to outplay and outwit governments (and the populations of these societies) that simply do not possess the vast resources of a company like ExxonMobil.

Meanwhile, in our times the term “socialism” is seen in decidedly negative terms.  Amnesia over empire and predator capitalism of the past has been replaced by a meek scramble for the attention of mainly foreign investors.

The party elected as the polls closed yesterday will now have the huge reserves of oil (if not the equal profits) in its grasp. What will our future be? Can we escape the clutches of the latest version of the winner takes all, at the expense of the working peoples of Guyana?