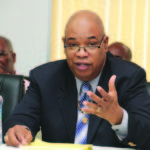 Former Junior Finance Minister Juan Edghill has written the country’s Commissioner of Police Leslie James to conduct an investigation into the contracts awarded by the government following the end of the fiscal year, 2019.

RE: REQUEST FOR INVESTIGATIONS INTO CONTRACTS FOR PUBLIC WORKS

It has come to my attention by way of news reports that new contracts for public works have been signed by Permanent Secretaries of various Ministries, in flagrant violation of the Laws of Guyana. Stabroek News reported a total of 57 contracts were noted by a Cabinet sub-committee as of the 30th day of December 2019.

In the above-mentioned article, Mr. Joseph Harmon is quoted as saying “that the monies that will be used to execute the contracts had been included in the 2019 budget”.
The Auditor General of Guyana made it very clear to the media a few weeks ago that “it is not allowed under the law for new contracts budgeted for in 2019, to be signed in 2020”, yet we found that several contracts were signed in 2020, including the largest of those being for the sum of Eight hundred and twenty-seven million Guyana dollars, (GYD 827M), which was signed with BK International for the construction of a secondary school at Yarrowkabra.

Further, it has come to my attention that despite the absence of a signed contract for the construction of a School at Abraham Zuil, a check was cut on the 31st December 2019 for $65 Million by the accounting officer. These funds were drawn from the 2019 budget allocations, a clear case of two illegalities; Issuance of public monies without a signed contract in place; and use of 2019 budgetary allocation to commence a 2020 project.
Article 217(1) of the Constitution of the Cooperative Republic of Guyana states:
“No Moneys shall be withdrawn from the Consolidated Fund except:
a. to meet the expenditure that is charged upon the Fund by this Constitution or by any Act of Parliament, or
b. where the issue of those monies has been authorized by an Appropriation Act, or
c. where the issue of those monies has been authorized under Article 21.”
Further, the Fiscal Management and Accountability Act Cap 73:02; at Section 43, states thus:
“Except as otherwise provided in this Act or in any other law, at the end of each fiscal year, any unexpended balance of public monies issued out of the Consolidated Fund shall be returned and surrendered to the Consolidated Fund.”

Assuming that the legal requirement for the return of all unexpended monies to the Consolidated Fund at the end of the fiscal year 2019 was complied with and, therefore, a legal mechanism would have had to be utilized to make withdrawals in 2020. As far as I am aware, no such legal mechanism exists that allows for payment of monies for contracts awarded in 2020.

It is against this backdrop that I would like to hereby request that the Guyana Police Force (GPF), immediately; launch an investigation into this matter.

CC:
The Auditor General of Guyana