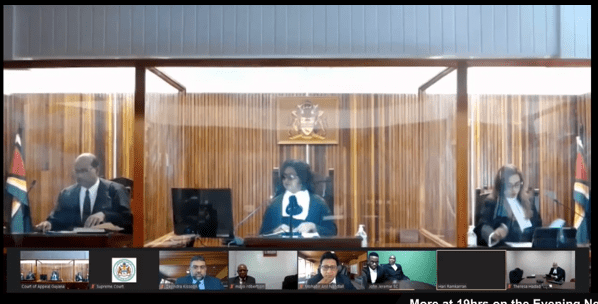 There was much drama today following a request by legal representatives of the APNU/AFC for a “Stay” after the Court of Appeal, in a unanimous decision, threw out the challenge brought by coalition supporter Misenga Jones which sought to block the Guyana Elections Commission from making a final declaration using the recount figures.

The appeal was heard by Appellate Justices Dawn Gregory and Rishi Persaud, in association with High Court Justice Priya Sewnarine-Beharry.

Much to the annoyance of the other legal representatives who were part of the proceedings, soon after the Justices were finished handing down their decisions, APNU/AFC Attorney Roysdale Forde made a request for the Court to grant a ‘Stay’ to “consider the way forward and to consider Your Honours decision”.

In a move seen as delaying the inevitable, Forde told the Court: “The stay is being asked in relation to the obvious effect of the Court’s decision, having regards to where we are in the process would mean that the Elections Commission and the instructions given to the CEO are to be acted upon”.

He pleaded: “All we are asking for your Honours is an opportunity, which was granted in the (Eslyn) David’s case, is for us to review the decision and to advise on the way forward.”

Attorney representing PPP/C General Secretary Bharrat Jagdeo and Presidential Candidate Irfaan Ali, Anil Nandlall was almost in disbelief that such a request was being entertained by Court considering the fact that there were no orders granted by the Court in its ruling.

“Your Honours did not grant any orders and therefore there is nothing to stay,” Nandlall told the Court.

He asserted that the APNU/AFC legal team is placing heavy reliance on the previous Eslyn David’s case, but that is different from the current matter.

Nandlall argued: “In David’s case there was some sort of order made and the effect of that was stayed. Here the appeal filed by the appellant has been dismissed. So it is not possible for there to be a stay.”

Prompted by Justice Gregory to present her position on the matter, GECOM Chair Justice Claudette Singh’s legal representative, Kim Kyte-Thomas expressed her utmost disgust at such a request since this would mean that the electoral process would be further dragged out, almost five months after the electorate voted.

“I fully endorse what Nandlall has said to the Court. Nothing has been granted, there is nothing to be stayed.”

Attorney Kyte-Thomas added: “All that has happened is a dismissal of a frivolous and vexatious appeal…The work of GECOM must be completed, if we continue like this, when will we have elections results, 2025? This is untenable.”

Attorney Timothy Jonas also agreed with Nandlall in objecting to the Court granting a stay arguing; “there is nothing jurisdictionally to permit a stay”, because there is no leave grated to an appeal.

He also asserted that given that two Justices have already ruled that this appeal is an abuse of the court’s process, “there is absolutely nothing to justify any exercise of that discretion.”

APNU/AFC’s Attorney Maxwell Edwards then jumped in and pleaded with the Court to give a favourable consideration to the request for a “short stay”.

At this point, Justice Gregory said two members of the Court have rejected the request for a stay and as such the majority decision of the court would have to be accepted.

After relentless pleadings by Edwards, Justice Gregory announced a decision to grant a stay of one day, much to the bewilderment and dissatisfaction of the other Counsels.

However, Justice Beharry vehemently lodged her dissent. Justice Persaud did not disagree and the stay was granted 2-1.

During a virtual engagement this afternoon following the CoA’s ruling, PPP/C General Secretary Bharrat Jagdeo said he was disappointed with the manner in which the Court treated with the request for a Stay by the APNU/AFC’s legal representatives.

“We were shocked to see how the court tolerated the nonsensical arguments that were proffered to justify the Stay,” Jagdeo stated.

He asserted that the Court did not answer the question posed by SC Douglas Mendes regarding what the Stay really meant; since “there was nothing to stay”.

The General Secretary contended that this is yet another blatant attempt by the David Granger-led APNU/AFC to stall the elections declaration.

It is now approaching five months since the March 2 General and Regional Elections were held in Guyana, and there is no declaration of a winner, even though the results are widely known.