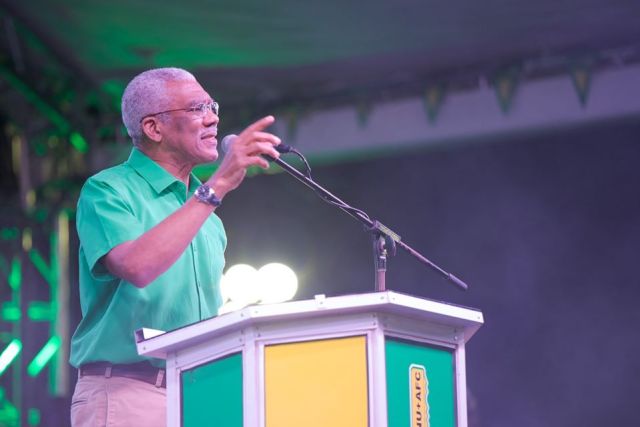 With heavy sanctions casting a dark shadow on Guyana’s future, two former United States government officials have stated that incumbent President David has a clear chance to be remembered in history as a “Statesman” if he concedes to his loss or crumble or as “Rogue President”.

The officials, Deborah Misir, former US Deputy Assistant Secretary of Policy, US Department of Labour and Douglas Meurs, former Political Advisor and Director for Somalia in the Office of the Secretary of Defense appeared on Kaieteur Radio’s Room592 and posed the question to the incumbent after the US, United Kingdom and Canada signaled the commencement of sanctions on top coalition officials, who had a hand in rigging the March 2, 2020 Elections.
So far, the US has announced visa restrictions but these sanctions could become harsher as Guyana’s electoral stalemate continues. According to Misir, those sanctions will be “warranted” due to the process being dragged out four months after Guyanese went to the polls.

“What is happening is ridiculous,” Misir added, “when you factor in the constant delays, frivolous litigations brought by officials in the A Partnership For National Unity + Alliance For Change (APNU+AFC) Coalition and Guyana’s apex court, the Caribbean Court of Justice (CCJ) speaking in support of the will of the electorate.”
“Do you want to be remembered as a Statesman or a Rouge President? You have that choice to be remembered respectfully and in history,” the former bureaucrat said.

Sanctions on government officials should come as no surprise to the coalition, Misir said, considering that they too supported heavy sanctions on Venezuela, and had called for then People’s Progressive Party (PPP) government in 2015 following then President Donald Ramotar’s prolonged prorogation of Parliament.

What was remarkable was the alacrity at which the sanctions were imposed, according to Douglas Meurs, former Political Advisor, noting the speed and coordination by the US, UK and Canada.
Granger, Meurs added, needs to realize that this represents an almost global consensus including the Caribbean Community (CARICOM) and the Organisation of American States (OAS) who are rejecting the Granger administration’s “pseudo legalistic tactics”, hiding behind “dubious interpretations of the Constitution”, and endlessly using the courts to stay in power and avoiding the recognition of the results of the March 2 Elections.
“After four months, they know that the new government should be in power and the will of the people respected,” he said.
Meurs stated that a lot of effort has gone into the coordinated efforts of sanctions, citing that the US government is not working alone and that it is not an isolated gesture that “should be shrugged off”.
Visa sanctions and more

The question was posed to both US officials, of what other sanctions Guyana could face and answers given were grim. The country already runs the risk of being thrown out of CARICOM and the Commonwealth for failure to adhere to Civil Society Carters and Treaties that include the conduct of free and fair elections.
If Granger refuses to heed to the calls for him to concede and demit office, visa sanctions would be the least of the country’s worries.

Meurs explained that, “Sanctions begin with targeting individuals because you want to inflict pain on the ring leaders and then it trickles down to the citizens who will face the brunt of it.”
The process, he said, has already started with visa restrictions, but immigration laws can also become strict for Guyana with officials running the risk of being placed on the US no-fly list and the terrorist watch list.
“The Coalition officials have family members living abroad, holding green cards, and that can be revoked,” he added.
Notwithstanding that, financial sanctions can be heavy for Guyana.

“Assets will be frozen,” Meurs said “you will be blacklisted; persons will not want to work with you. They will not want the scrutiny of the US, UK, Canada and others on their financial affairs looking for illegal assets, drug trafficking, transfer of state assets and the works. Sanctions can include a cut in foreign assistance, export import limitations, cut funding from World Bank.”
These are things, he noted, that President Granger needs to be aware of because “they do not want what is going to come down on them”.

Using Venezuela as an example, Meurs said that more than 700 officials from across 150 entities will face sanctions this month in Guyana’s South American neighbour.
“The reach of the US is far and strong and rightful because they want the will of the Guyanese people to be respected,” he concluded.