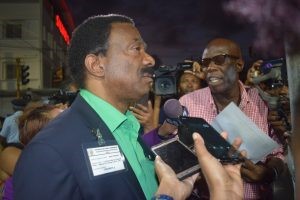 With anxiety high in Guyana as every citizen sits on edge awaiting the announcement of the March 2, 2020 results, Guyanese will be forced to wait a bit longer after the Guyana Elections Commission yesterday discovered a number of discrepancies during the tabulation process of the results for Region Four.

The issue emerged after the Returning Officer for that region; Mr. Clairmont Mingo fell ill earlier in the day.
Mingo was rushed to the Georgetown Public Hospital after he complained of feeling unwell. This halted tabulations temporarily.
But according to reports, shortly after, he was up and back at the GECOM Media Centre to resume verifying the election count.

Kaieteur News was reliably informed that in Mingo’s absence, an unverified spreadsheet system was introduced to continue tabulations but this process was stopped after it was discovered that the numbers on the spreadsheet and the ones on the approved SOPs did not match.
Party Candidates and officials from the various Observer Missions called an emergency meeting with GECOM and this resulted in the spreadsheet method being scrapped.

Chief Elections Officer, Keith Lowenfield, explained that the RO’s clerk was told to resume the halted tabulations.
He said, “The process of verification commenced in earnest at around 2:00pm and during the process, some errors were found.”

“We would have completed some eight statements and there were some errors contained in six of them. The representatives from the parties and the observers spoke with me and we stopped the process.”
According to Lowenfield, the tabulation process will be reverted to its initial method; using just the SOP’s.
“We agreed that we will do the verification statement by statement so I take out my statement and you take out your statement…
We go through the numbers on the statement and if there continues to be errors, there is a procedure prescribed for us to do that.”

“They have to go back to the law…We don’t know who generated this list that they started using.”
However, Attorney General and Minister of Legal Affairs, Basil Williams, who was also at the Centre opined that the “objections being raised were not valid.”
Basil said, “We don’t think so…the spreadsheet is something that was inherited from their time…We have no objections…Let us just get this over with.”

Jagdeo noted that his party will remain patient as GECOM continues the tabulations to deliver the final and official results for the elections.
However, later in the evening, the tabulations process was stalled once again, further delaying the process.
Kaieteur News was informed that after the tabulations continued from the previous stop, party officials were reassured that the process will continue unhindered.

It was said that later on, a fifteen-minute break was taken and then the process resumed.
But according to information received, the Clerk of the Returning Officer who is pregnant asked for another break but this was objected to since it was not part of the initial agreement.

Chairperson of GECOM, Justice (ret’d) Claudette Singh, granted the break due to the condition of the clerk much to the annoyance of the representatives of the political parties there.
It was said that members of the coalition left the media centre while officials from the PPP and other smaller parties remained to ensure that a replacement was sent so that the stalled process could continue.