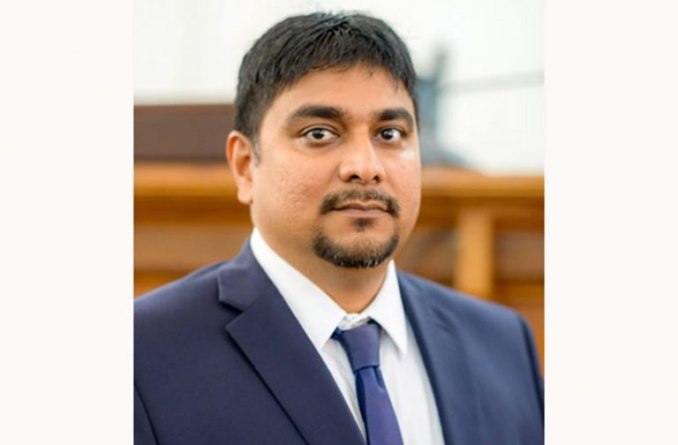 If efforts to have transparent and credible elections are successfully defeated, then the international sanctions for all those who had a hand in this process would be dire. So says Attorney-at-law and Candidate for the People’s Progressive Party (PPP), Sanjeev Datadin.

During an exclusive interview with Kaieteur News yesterday, Datadin intimated that countries which implement the sanctions would not be doing so on the mere complaints of politicians in Guyana but more significantly, on the credible pieces of evidence their officials would have obtained independently on the tainted integrity of the General and Regional Elections.

Datadin said, “These countries have embassies here as well as their representatives here and they must have realised and ascertained to their own satisfaction that the elections are being rigged…They have said repeatedly that anyone who benefits from fraudulent elections will be sanctioned.” In this regard, the lawyer said that the sanctions are being spoken of in a personal sense. He said it therefore means that visas would be revoked, and assets and accounts would be frozen. Datadin cautioned that this not only applies to politicians directly involved but their families too. Also affected would be the major financial backers of the parties and their family members as well as officials at the Guyana Elections Commission (GECOM) and their relatives too.

Further to this, Datadin said that the continued refusal by GECOM to willingly produce the Statement of Polls (SOPs) at a time when the country is being held at ransom, is preposterous. He said that if GECOM wanted to be fair and was desirous of a transparent process it would release the SOPs so all could see.

The PPP Candidate added, “To send lawyers into a court to fight for the release of SOPs and then to hear them say they will only do it when there is an elections’ petition does not help Guyana. It only helps those who are trying to rig the elections. And make no mistake, this is a blatant and calculated effort to rig the 2020 elections.”

Given the events that have unfolded in Guyana since the March 2 General and Regional Elections were held, Datadin said it is only those who want to be blind would not see that there were serious problems with the integrity of the electoral process and that it was not done in accordance with the law. He also said that the government’s need to hide behind statements such as “GECOM is independent” and they “will carry out what GECOM says” can only be seen as a blatant attempt to not answer whether the tabulation of the Region Four votes was lawful, transparent, and fair.

Importantly, the lawyer noted that Guyana and particularly, the APNU+AFC politicians should pay keen attention to the sanctions Venezuela is facing as a result of a government that does not enjoy the blessings of the international community.

Datadin said, “What is happening in Venezuela is a sign for us, it will mean we won’t be able to access international financial funding and we are going to have a problem with foreign direct investment…”

Earlier this week, Venezuela applied to the International Monetary Fund (IMF) for a US$5B loan but its request was denied. According to the Associated Press, Venezuela is in dire need of the loan to fight the coronavirus which threatens to push the Spanish speaking country’s already battered economy over the edge.

But even in such unfortunate circumstances, an IMF spokesperson told the Associated Press that the request could not be considered since there was no clarity among its 189 member states on who it recognizes as Venezuela’s rightful leader: Nicolás Maduro or Juan Guaidó, the U.S.-backed head of congress. “Unfortunately, the Fund is not in a position to consider this request. As we have mentioned before, IMF engagement with member countries is predicated on official government recognition by the international community, as reflected in the IMF’s membership,” the spokesperson said in a statement while adding, ‘There is no clarity on recognition at this time.”

The Associated Press went on to note that Maduro’s appeal to an institution he has long vilified came as a shock to friends and foes alike since it is an about-face for Maduro, who for years, refused to share economic data with the Washington-based lender and just last month, condemned it as a tool of U.S. imperialism. In the past, he has called the IMF a blood-sucking “assassin” responsible for plunging millions of people into poverty across Latin America.
The news agency said it also lays bare the precarious state of finances in socialist-run Venezuela as it struggles with collapsing oil production and the effect of U.S. sanctions.

While Venezuela’s exposure to the coronavirus has so far been limited — with just 33 cases confirmed — the Associated Press said that the potential economic damage from the disease has the entire country of around 30 million on edge.

But even before the virus’ outbreak, the Associated Press noted that Venezuela’s oil industry was on its knees. In this regard, it noted that severe sanctions applied last year by the Trump administration nearly halved oil production and worsened a humanitarian crisis that has pushed nearly five million people to flee the country.
Compounding that, is the fact that the country will have to contend with oil prices at a multi-year low amid a meltdown in oil markets that followed Saudi Arabia’s decision to flood the market to retaliate against Russia’s refusal to go along with a proposed OPEC production cut. Making matters worse, most of the added supply from Saudi Arabia is of the same heavy crude variety that Venezuela produces, the Associated Press reported.

RAPID FINANCING INSTRUMENT
The IMF had set up the rapid financing instrument in 2011 as a one-time, short-term loan aimed at helping low-income countries absorb shocks like natural disasters. The amount a country can request is restricted to 100% of the country’s quota at the IMF—about $5 billion in Venezuela’s case—and is supposed to be less comprehensive than traditional loans.

However, countries with debt levels the IMF deems unsustainable are barred from taking out loans. The Associated Press noted that such could be the case of Venezuela, which has defaulted on more than $65 billion in bonds and owes billions more to Russia, China and dozens of foreign energy companies whose assets it expropriated over the past two decades.

The Associated Press also noted that Venezuela is believed to be the first country to try to tap the $50 billion in financing the IMF has available to help developing nations deal with the virus.
It said that the U.S., which is the biggest shareholder and has a veto over major decisions at the Washington-based lender, has balked at assisting a Maduro government it no longer recognizes and accuses of stealing billions from its own people.