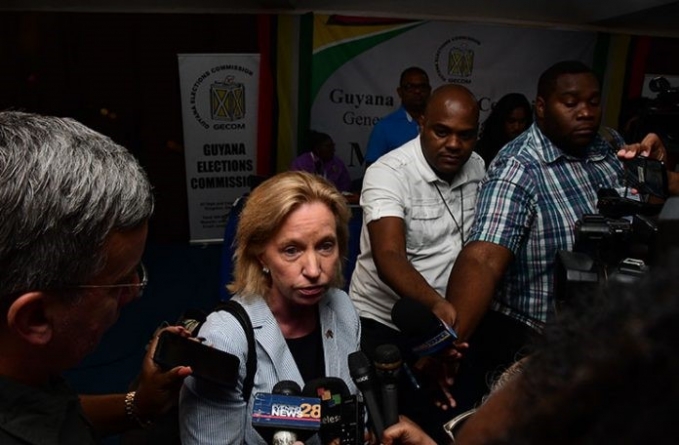 Even as it praised Guyana for the successful and peaceful conduct of General and Regional Elections on Monday, the Diplomatic Community called on Guyanese to respect the results when they are made public by the Guyana Elections Commission (GECOM).

“It is important to give GECOM time to complete the tabulation and verification of the results. At the same time, we understand the importance of results being released as quickly as possible. We call on all Guyanese to respect those results,” British High Commissioner, Greg Quinn, and the Ambassador of the United States of America, Sarah-Ann Lynch, said in a joint statement on Tuesday.

In offering its commendation, the Diplomats congratulated the people of Guyana for preserving the country’s democracy through the participation of peaceful elections.
“We commend Guyana Elections Commission (GECOM) Officials, the Guyana Police Force, and representatives of all political parties for maintaining an orderly process on Election Day,” the Diplomats said.

Even as the country awaits preliminary results for the General and Regional Elections, High Commissioner Quinn and Ambassador Lynch underscored the importance of allowing GECOM to conduct its work.

Meanwhile, on the sideline of a GECOM press conference on Tuesday, at its command center, the US Ambassador told journalists that the electoral process was “smooth.” She said the US Embassy, like the rest of Guyana, looks forward to the final results.

Ambassador Lynch had observed polling in Essequibo, Bartica, New Amsterdam and Georgetown among other locations. “In each case, things were well run and very smooth,” she said while dubbing it an achievement for Guyana. The US Ambassador said it was important for Guyana to maintain the peace and respect the final results.

The European Union (EU) Ambassador, Fernando Ponz Cantó, who was among the diplomats present, also lauded the electoral process. He, however, lobbied for the country to respect the results.