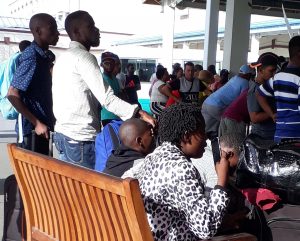 President Dr Irfaan Ali has revealed that the 26 Haitian nationals detained in Guyana for a number of weeks now are clearly victims of “people smuggling”.
The Head of State told reporters on the sidelines of an event on Wednesday night that while investigations are ongoing, it is clear what transpired.
“It is clear…this was people smuggling; a lot of it was people smuggling. You had children without their parents. You had the breach of our immigration laws, where everybody gave the same address and the address doesn’t exist…The investigation is ongoing, and the charges will be in place,” President Ali posited.

He went on to dismiss any notion that Government is considering visa restrictions against Haitians. The President said nothing of the sort has been discussed.
International law covers trafficking migrants. The UN Convention against Transnational Organised Crime (UNTOC) says this about ‘migrant smuggling’: “Smuggling of Migrants is a crime involving the procurement for financial or other material benefit of illegal entry of a person into a State of which that person is not a national or resident. It undermines the integrity of countries and communities, and costs thousands of people their lives every year.”
Meanwhile, Home Affairs Minister Robeson Benn has indicated that the movement of the more than two dozen Haitians was “not regular”.

“We are taking action against all those who have entered the country illegally, and the proper action too… Unfortunately, it appears that has only to do with Haitians, given the current situation, but it is clear that the movement is not regular, and we’re dealing with the issue,” Benn told reporters on the sideline of an event at the Arthur Chung Conference Centre on Wednesday.
City Magistrate Sherdel Isaacs-Marcus has since granted the Police request to have the Haitian nationals deported to their homeland.

Those in custody were 10 males, nine females and seven children (two boys and five girls).
President of the Association of Haitian Nationals in Guyana, Kesnel Toussaint, through an attorney, had filed Habeas Corpus proceedings, asking the court to release his countrymen, as they are being held unlawfully. Toussaint argued that their continued detention violates their fundamental right to liberty.
Following the 26 Haitians’ detention, the Home Affairs Ministry said it had teamed up with the Guyana Police Force to investigate the suspected human trafficking involving the Haitian nationals.
They were arrested in two separate Police operations – in a minibus along the Mabura Trail, Region 10 (Upper Demerara-Berbice), and in a city hotel. They were detained by Police after it was discovered that they had entered the country illegally via Suriname.

Police also related that they were en route to neighbouring Brazil at the time of interception.
Back in 2019, former Citizenship Minister Winston Felix had revealed that between January and July 2019, some 7000 Haitian nationals were unaccounted for. While the issue of foreign nationals overstaying their time in the country is not a new one, the numbers have significantly increased since 2015.
In 2013, 188 Haitians arrived in Guyana, with 99 departures; and in 2014, 227 arrived and 113 departed. But in 2015, there were 770 arrivals and only 136 departures; in 2016, 722 arrivals with 451 departures; in 2017, 3515 arrivals and 291 departures; and in 2018, 1237 arrivals with only 85 departures.

While the former Government has long contended that the immigrants may be leaving Guyana illegally for Brazil, Suriname and French Guiana, there was no concrete move by them to monitor the situation or attempt to put a stop to the illegal movement of people.
These numbers of unaccounted Haitians had raised major concerns, especially for the then parliamentary Opposition, the People’s Progressive Party/Civic, which had alleged that there might be a people-smuggling racket.
Felix had also stated that those unaccounted Haitians might be leaving through the “backtrack” (unauthorised ports) to go to other countries.