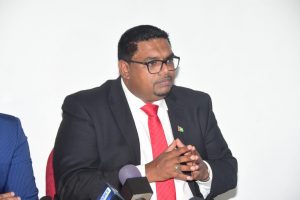 While assuring that Guyana will not fall into a state of dictatorship, Presidential Candidate of the People’s Progressive Party/Civic (PPP/C), Dr Irfaan Ali on Monday reiterated that democracy would prevail at the end of the battle.

This comes after an A Partnership for National Unity/Alliance For Change (APNU/AFC) candidate injunction blocked the recount process as the people continue to wait for over three weeks for credible results from the Guyana Elections Commission (GECOM) on the March 2, 2020 polls.

On Monday, the High Court agreed to hear together the two cases filed – the first was the injunction filed by APNU/AFC candidate Ulita Moore last Tuesday to block the recounting process while the second was filed by Opposition Leader Bharrat Jagdeo to have GECOM independently recount the votes in the interest of transparency.
The Opposition’s case is backed by provisions in Section Five of the Representation of the People Act; Sections 22 and 23 of the Elections Law and Amendment Act 2000; and supremely, Article 162 of the Constitution.

Democracy
Taking this into account, Ali stated that the return of democratic rule was worth the wait. This, he noted, is essential in returning the rights of the people to select a government of their choice. However, the electoral season has uncovered the fragility of the country’s democracy.

“The case is very clear. It is a very simple issue … I know that it’s taking some time, but democracy is worth it. Your liberty and your freedom and your right and exercising that right for a political party of your choice, electing a government of your choice, is much more important than the time you’re going through here,” he said in a broadcast statement.

Ali also mentioned, “The electoral issue has given rise to how fragile our democracy is and this struggle, commitment and this energy is all in securing the democratic values of our country…At the end of the day, Guyana will win and democracy will win and we are committing ourselves to this struggle.”

Weighing in on the recount, the Presidential Candidate called out the coalition – APNU/AFC – for intruding on the process with its calculated hurdles. However, the recount of the ballots is indispensable.
“The APNU/AFC, they are putting hurdles in the way of this recount. This recount is necessary to take our country forward, to move our country forward … We have to do this from a platform of respecting the democratic will of the people. We have to start this process by doing the right thing and the right thing is for us to complete the recount and to ensure that the democratic values of our society are upheld.”

For this, it was indicated that the country must never fall into the hands of a dictatorship, and most importantly, must prevent a violation of the people’s rights.
“The Commission made a decision for a recount. The Commission agreed for a recount. The Chairman of the Commission, in her affidavit, alluded to the fact that she had committed herself to this national recount…We have to protect these rights … At no time, must our society and country ever suffer in the hands of a dictatorship or [be] bullied into a dictatorship. None of us want this existing situation or scenario, which can be easily cured. This can be easily cured by us going to the recount and stop finding hurdles,” Ali asserted.

Analysing the governance of the PPP, it was assured that the interest of all stakeholders will be addressed.
“A PPP/C-led Government is not a government that would only work in the interest of PPP supporters…We said it is necessary for us to come together as a people [and] agree on a common platform, a unified platform through which we can ensure development and access to development,” Ali detailed.